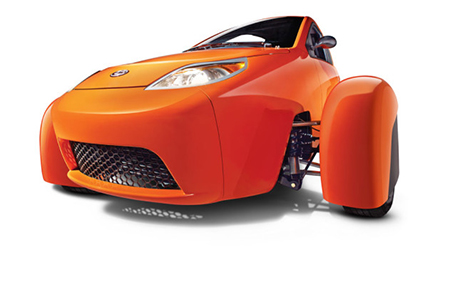 Troy-based Elio Motors, a manufacturer working to develop low cost and fuel-efficient cars, and a development partner, unveiled a new 3-cylinder engine prototype for use in its three-wheeled vehicles.

“(There is no engine) available that combines the speed and power that we want and our customers deserve,” says Paul Elio, president and CEO. (Engine developer) IAV came through with an outstanding execution of today’s best technology that will be a cornerstone to delivering a world-class vehicle.”

Elio says the new engine can deliver up to 84 miles per gallon and a reach a top speed of nearly 100 miles per hour. Parts including the water pump, cylinder block, and front cover were developed specifically for Elio Motors. He says the vehicle, called the Elio, will operate much like a normal vehicle, and offers standard features such as power windows, air conditioning, and multiple air bags.

The car will be manufactured in Shreveport, La., in partnership with Comau, an Italian auto company that’s part of the Fiat Group.

Elio Motors plans to launch the vehicle in the first half of 2016. They are accepting reservations to buy a car once it goes to production. The Elio is expected to cost $6,800.