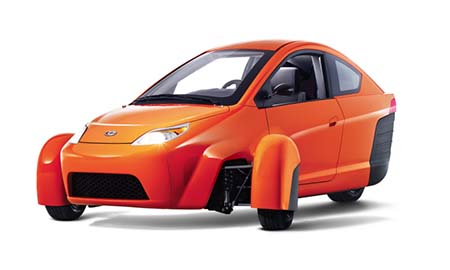 Troy-based Elio Motors, a manufacturer working to develop low-cost and fuel-efficient cars, announced it has started work on its fifth generation, three-wheeled prototype vehicle that will get up to 84 miles per gallon. The 3-cylinder vehicle is expected to launch in mid-2016 and retail for about $6,800.

“The P5 build is another important step in our march toward production and is the culmination of several important strategic initiatives we have completed or launched in the past several months,” says Paul Elio, founder and CEO of Elio Motors.

Elio says the P5 is the first in a series of 26 prototypes that will be developed for testing and validation purposes. Elio will build the vehicle with its manufacturing partner Comau at a facility in Shreveport, La. General Motors previously built the Hummer H3 and the Chevy Colorado at the facility.

He says two of the most critical elements being added to the P5 are the engine and the transmission. The engine, unveiled in March, can deliver up to 84 miles per gallon and reach a top speed of 100 miles per hour. Elio says the water pump, cylinder block, and front cover were developed specifically for Elio Motors. The P5’s transmission will be a multi-mode manual transmission developed by the Japanese company, Aisin Seiki Co.

“The engine and transmission are key elements in creating driving characteristics that consumers demand,” Elio says. “Fuel economy is obviously important, but we still need speed and acceleration that are comparable to today’s passenger vehicles.”â€‹