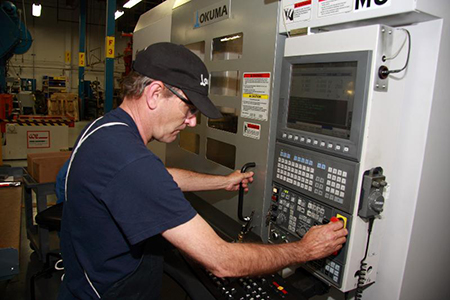 With a current shortage of machinists, Troy-based Diversified Industrial Staffing, a provider of skilled labor talent, has launched a new training school to teach students how to set up and operate machinery, as well as design new equipment.

“There is a massive need for the next generation of skilled CNC (Computer Numerical Control) machinists,” says Todd Palmer, CEO of Diversified Industrial Staffing. “In 2012, 53 percent of skilled-trade workers in the United States were 45 years and older, according to Economic Modeling Specialists Inc., and 18.6 percent were between the ages of 55 and 64.”

The company has partnered with a software provider who has trained more than 5,000 machinists through online and virtual training classes. The program takes three to four months to complete.

“We believe this is a powerful opportunity for the student who isn’t interested or able to attend a traditional university or community college, but wants a viable, well-paid career,” Palmer says.

The median salary for CNC machinists is about $20 an hour, or almost $40,000 a year, according to the U.S. Bureau of Labor Statistics.

Skilled Labor Training Centers will launch its first class in the coming weeks in metro Detroit. To apply, visit real-job.org.