Scott Moloney, owner of Treat Dreams ice cream shops in Ferndale and Detroit, will open a barbecue restaurant in downtown Clawson by the end of the summer.

The restaurant called the Woodpile BBQ Shack, will be located on the site of a former A&W, at 303 S. Main St., and will feature carry-out barbeque, Treat Dreams ice cream, and a menu created by Steve ‘Bubba’ Coddington, formerly of Lockhart’s BBQ in Royal Oak and the winner of the 2013 National Pit Master of the year contest. Principals in the venture include Tim Idzikowski Sr., Zac Idzikowski, and Brandon Hannish, along with Moloney.

“I’m excited to be able to bring true southern style BBQ to Clawson and the metro Detroit area,” says Coddington, general manager and pit master of the Woodpile BBQ Shack. 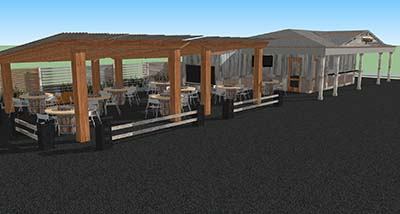 Meats will be served in half-pound increments and include options such as central Texas beef brisket, Carolina chopped pork, smoked chicken, smoked jalapeno cheddar sausage, and Texas trinity (a mixture of brisket, ribs, and sausage).

Sandwiches, which are served with one side, will range in price from $6 to $10, while meat selections run from $10 to $17 per pound. The eatery will offer covered, outdoor seating.

At the Pig and Whiskey festival running Friday through Sunday in downtown Ferndale, The Woodpile BBQ Shack will serve samples of its menu, including ribs, chopped pork, and beef brisket.