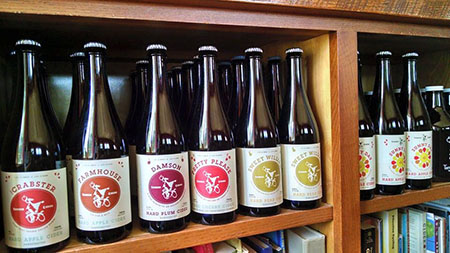 “Traverse City is already well-known as a wine and craft beer destination, but it’s also been developing a strong hard cider culture thanks to a handful of dedicated cider-makers,” says Mike Norton, spokesman for Traverse City Tourism. “Traverse City Cider Week is an opportunity for producers and consumers to meet, taste, socialize, and learn more about this growing phenomenon.”

Events include a “Cider and Sausage Salon” on Aug. 19, which features live music, games, and Michigan cider and sausage tastings at the newly renovated Cathedral Barn at the Grand Traverse Commons. The week will also include workshops for home cider makers and industry professionals.

The host of the event, the Michigan Cider Association, held a similar event in Grand Rapids in April. The association says Michigan ranks third in the United States in terms of cider production, with more than 9 percent of the nation’s cider makers. In the past five years, U.S. cider sales have grown from $35 million to $266 million.

Wineries in the Traverse City area have taken advantage of the growth, with Black Star Farms, Bower Harbor Vineyards, and Left Foot Charley all adding ciders to their offerings. Tandem Ciders in Leelanau County is the region’s only fully-dedicated cidery.