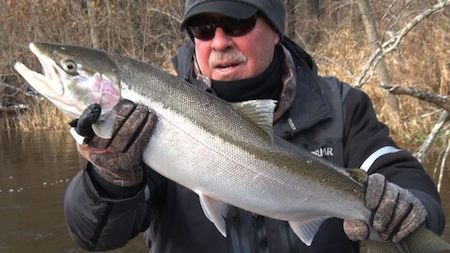 A new television show promoting the sport of fishing in the Traverse City region will premiere tonight on the World Fishing Network.

“The Traverse City region is the Holy Grail in terms of freshwater sport fishing,” says Danny Leonard, the host of iFishigan and a fishing professional, former guide, and outdoor television personality. “But if you’re not an avid Michigan fisherman who has fished around the world, there’s really no way of knowing it.”

Leonard filmed iFishigan with his own crew, Team Outdoors Dreams, this past summer and fall throughout the Grand Traverse region. He says the resulting 30-minute episodes provide “big fish action,” interspersed with short segments that highlight the area’s natural beauty, food and wine scene, and recreational opportunities.

The 13-epsiode series will originally air at 10:30 p.m. Wednesdays and then be viewed at various times through June on WFN, which is available in more than 50 million households in the U.S., Canada, and the Caribbean. Full listings are available at worldfishingnetwork.com/ifishigan.

American anglers account for $42.2 billion in U.S. retail sales each year, with an annual impact of $125 billion, according to the U.S. National Survey of Fishing, Hunting, and Wildlife-Associated Recreation. On a statewide level, they spent $2.4 billion in trip-related expenses and equipment according to the latest available figures.