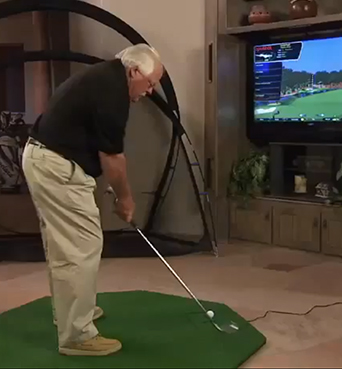 Traverse City-based OptiShot has released a free online trial of its popular golf simulator, allowing golfers to test the features and numerous courses of the No. 1 golf trainer.

The simulator, first released in 2005, measures club and grip impact, provides users with a detailed 3-D experience as well as feedback on how to improve their swing while “playing” golf courses at Warwick Hills in Grand Blanc Township, West Maui Plantation in Maui, Hawaii, among others.

“The idea that golf can only be played on a course is wrong,” says Russell Edens, co-founder and CEO of OptiShot. “Before, that type of technology (in the simulator) could only exist at golf courses and pro shops. And if you wanted to play real golf at home, you weren’t able to.”

He says the simulator experience is somewhat comparable to a video game — all you need is a computer, a set of golf clubs, and at least an 8.5-foot-high ceiling.

The trial version of the game is a little less intensive as its uses a computer mouse or keyboard, rather than clubs, to test out three, full-version OptiShot courses. “I love all (three courses), with the classic doglegs at Warwick, the roll of the wind at West Maui Plantation, and the old desert feel at Scottsdale,” Edens says.

Before Edens used the device, he didn’t have a very good handicap, and was stuck shooting balls with a hook, he says. After using OptiShot, he says was able to solve the hook issue, and bring his handicap down to six.

Looking forward, Edens plans to release OptiShot Live, where users can play against others online.

For more information, or to download the trial, visit optishotgolf.com.