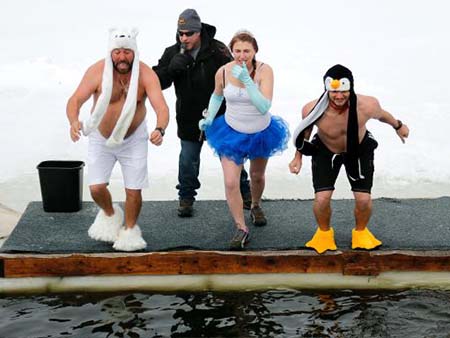 “We were dogsledding racing quads on the lake, ice fishing, snowmobiling, and ending our day with some of the best beers you could ever imagine in your hand (during filming of the show),” says Bert Kreischer, host of Trip Flip.

The half-hour television show is hosted by Kreischer, a comedian. Each episode, he convinces two people to take an all-expenses-paid, three-day vacation to get them out of their comfort zones.

For the show, Kreischer meets siblings Jordan and Matt from Shreveport, La. and flies them to Michigan in the middle of winter. Kreischer takes them to Mackinac Island, Crystal Mountain south of Traverse City to go dog sledding, and to Traverse City’s North Peak Brewery, where they meet up with another Travel Channel host, Ryan Van Duzer.

“Mackinac Island was absolutely magical in the winter, one of those kind of places you don’t think you’ll ever see because you didn’t know it existed,” Kreischer says. “An iced-over Great Lake is one of the more beautiful things I’ve ever witnessed in my life.”

Kreischer will also travel to Alabama, Fiji, Louisiana, South Africa, Texas, and Vietnam for the 2015 season.