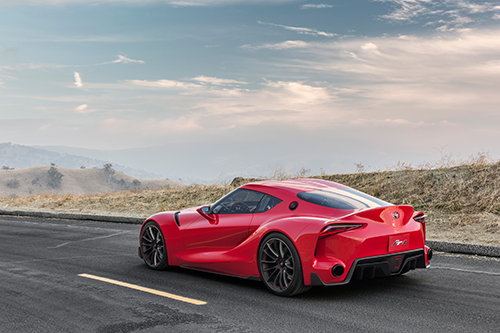 “(The) FT-1 is symbolic of a new chapter for Toyota Global Design,” says Kevin Hunter, president of Newport Beach, Calif.,-based Calty Design Research, a Toyota design studio that has an office in Ann Arbor. “This provocative concept truly captures the passion, excitement, and energy of the Toyota we are evolving into and embodies elements of the emotion and performance that Toyota will imprint upon future production designs.”

When pitching the concept car to Toyota management, Calty worked with Polyphony Digital — creators of the Gran Turismo driving simulator — to bring the FT-1 to life in a virtual world. When the automaker’s executives were offered the opportunity to take the virtual vehicle for a timed lap around a computer-generated Fuji Speedway, Akio Toyoda, Toyota’s president and an accomplished racecar driver, completed the virtual circuit faster than his best real-world lap time at Fuji in his LFA.

Technical specifications do not accompany the concept, although the automaker says the FT-1 represents an ideally balanced front-engine, rear-wheel-drive layout that is powered by a high-tech, high-performance internal combustion engine.

While the actual model is still but a concept, the virtual version will be available as a free online update for PlayStation 3’s Gran Turismo 6 (GT6) real driving simulator, beginning Thursday.

“Thanks to the amazing capability of the Gran Turismo game engine, gamers can enjoy a very real simulation piloting the ultra-high performance FT-1 on the tracks it was designed to master,” Hunter says.