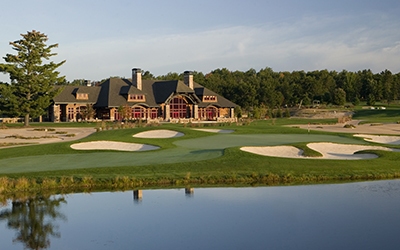 Forest Dunes Golf Club, in northern Michigan near Roscommon, is bringing on board famed designer Tom Doak and his Traverse City-based Renaissance Golf Design team to design and build a reversible 18-hole course.

Under the plan, golfers would be able to play two distinct layouts using the same greens but playing clockwise one way, and counterclockwise the other.

“This is a concept I have thought about for 30 years,” says Doak, who also designed the Black Forest course at the Wilderness Valley Golf Club in Gaylord. “You need the right site and the right client to understand the appeal of it. At Forest Dunes, we finally have both.”

Ideally, the new course will encourage golfers to stay on the property an extra night or two after they play the club’s Tom Weiskopf-designed 18-hole course, which is listed at No. 72 in Golf Magazine’s rankings of the Top 100 courses in America.

“The appeal of a reversible course is people would want to play it both ways,” Doak says. “You are getting two golf courses in one.”

And with longer stays inevitably comes the need for additional accommodations. Last year, the course expanded its on-site accommodations to include a 14-room lodge in addition to the six cottages that were already available for rent.

“We’ll probably need to double the accommodations that we have,” says Todd Campbell, Forest Dunes’ general manager. “We’re actually working on some different ideas right now, but we want to get all of our pieces together so we know what our next move is.”

Campbell says the club began prepping the site last fall and is hoping to have Doak and his team begin shaping the first six holes as early as this fall. The target date for opening is set for August 2016.

“Once the golf course is under construction, we can double back and start work on the accommodations,” Campbell says.

Doak says the Forest Dunes site is perfect for the novel, double dip course because the land has small undulations and is not hilly.

“It is not a super dramatic site, but that’s better for this concept,” he says. “If you were playing over ravines in one direction, you’d probably have to play blindly out of them the other way around. You can’t have woods behind the green, or you’d have to play over the trees from the other direction.”

Doak says the idea of a reversible course is not as revolutionary as it sounds. Many Scottish links, including The Old Course at St. Andrews, were played in reverse in winter to spread out the wear and tear of divots. In turn, architects including Tom Simpson and Alister MacKenzie have designed private estate courses with a handful of reversible holes. But, as far as Doak is aware, there is no 18-hole course in the world that is played fully in reverse on a regular basis.