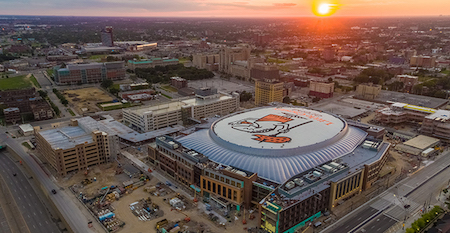 Tickets start at $25, and the showcase will feature matchups between U-M vs. UDM, and MSU vs. OU. Game times will be announced at a later date. On the same day, the Detroit Lions will be hosting the Chicago Bears at Ford Field at 4:30 p.m.

The game between UDM and U-M will mark the first college basketball game at Little Caesars Arena, paying homage to the first event at Joe Louis Arena on Dec. 12, 1979, which saw Michigan claim an 85-72 win over UDM.

“As the list of sporting events, concerts, and family shows continues to grow at Little Caesars Arena, we look forward to showcasing four of our local teams and creating memorable experiences for the student-athletes, coaches and fans – before, during, and after the games,” says Tom Wilson, president of Olympia Entertainment.

Little Caesars Arena, which will be home to the Detroit Red Wings and the Detroit Pistons, will open on Sept. 12 with the first of six shows by entertainer Kid Rock. The arena will offer 20,000 seats for hockey games and 22,000 for basketball games.

In turn, the NCAA has announced that Little Caesars Arena will play host to the 2018 and 2021 First and Second Round games of the NCAA Men’s Basketball Championships.

Fans can purchase tickets for The District Detroit College Basketball Showcase at the Joe Louis Arena Box Office, Fox Theatre Box Office, online at OlympiaEntertainment.com, and ticketmaster.com, or by calling the Red Wings Ticket Sales and Service Office at 313-471-7575.

IN RELATED NEWS, Olympia Entertainment today announced details surrounding the free Community Sneak Peek at Little Caesars Arena taking place on Saturday, Sept. 9 from 2-8 p.m. This free admission tour is part of Little Caesars Arena Preview Week and is one of the first opportunities for fans and community members to experience the “Via” concourse, look into the arena bowl, and more.

Attendees are encouraged to arrive 45 minutes prior to their reserved tour time at the Comerica Bank entrance located on the corner of Woodward Ave. and Henry St. Free parking will be available at Olympia Development parking garages and surface lots. For event information, including directions and a parking map, click here.