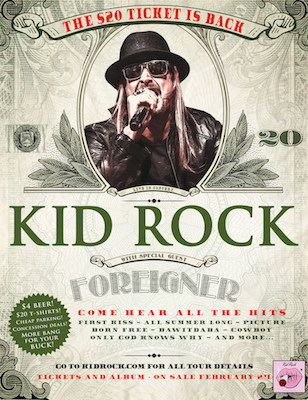 Tickets for Kid Rock’s 35-date summer tour are set to go on sale Feb. 24, the same day his new album, First Kiss, hits iTunes and stores nationwide. The tour will be promoted by Live Nation, which has an office in Novi.

Tickets from the second row to the lawn will be $20, with reduced parking and service fees keeping prices at or below $30. The first row of seats for every show will be held back and given as free upgrades for lucky fans, say event officials.

Kid Rock Fan Club members will be able to purchase tickets beginning Thursday, and fans who pre-order the First Kiss album through KidRock.com will be eligible for a special pre-sale beginning on Friday. In addition, fans can purchase $20 all-in tickets (including parking, at participating Wal-Mart stores and at venue box offices.

And in a first for the artist, Kid Rock is going experiment with a new technology called “Twitter” on Thursday, when he takes over the iTunes Twitter handle at 5 p.m. (EST) to answer fans’ questions.

IN RELATED NEWS, Kid Rock will perform at the Daytona 500 on Sunday. The performance will air at 12:15 p.m. on FOX. He also will appear on The Tonight Show Starring Jimmy Fallon on Feb. 23, The Today Show on Feb. 24, followed by a talk with Howard Stern on Feb. 25.