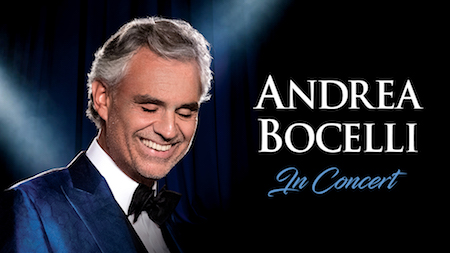 World-renowned tenor Andrea Bocelli will be returning to Detroit, to perform during Little Caesars Arena’s inaugural season, on Sunday, Dec. 3.

The performance will feature a repertoire from Bocelli’s Grammy-nominated album, Cinema, special selections from the 20th anniversary of Romanza, and a selection of traditional Arias, love songs, and crossover hits. He will performing with the Detroit Symphony Orchestra, conductor Eugene Kohn, soprano Larisa Martinez, and guest artist Heather Headley.

Bocelli, a classically trained Italian opera and crossover singer, has performed worldwide and recorded over 40 albums and musical scores, despite losing his sight at the age of 12. Bocelli’s last Detroit performance was at Joe Louis Arena in December 2014.

Patrick Rugiero, who with his family, owns Roman Village Cucina Italiana in Dearborn, says he’s hopeful Bocelli will return to the restaurant during his time in Detroit. The restaurant was opened in 1964.

“Andrea Bocelli has visited Roman Village on numerous occasions, and one of the first times he came he prepared his version of Spaghetti Carbonara in our kitchen,” Rugiero says. “So we put his dish, called Spaghetti Carbonara alla Bocelli, on our menu. The recipe includes Pancetta (Italian bacon), eggs, parmesan cheese, and pasta, all of which is sautéed in a pan.

“We’ve also have the dish available at our three Antonio’s Cucina Italiana restaurants (in Dearborn Heights, Canton Township, and Farmington Hills). Because he is legally blind, his preparation of the dish made it even more memorable.”

Presale ticket sales began today at 10 a.m. and will continue through Sunday, March 26 at 10 p.m with the promotional code “Tigers.”

Tickets and more information can be found here.