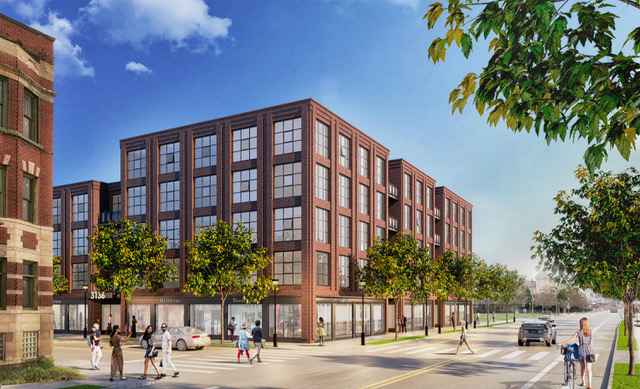 The Brush 8 will offer eight luxury townhouses and is slated to open in January 2020, while 178 apartments will make up Brush House, scheduled to open in September 2021. A third development, Brush + Watson, will be developed by American Community Developers Inc.

“We are honored that the city of Detroit has put their faith in our ability to add to the spirited, forward-thinking redevelopment of Brush Park,” says Moddie Turay, founder and principal partner of City Growth Partners. “Our team is fully committed and looking forward to delivering two exceptional projects that add to the community and neighborhood. An essential element of City Growth Partner’s design process will be community engagement across all phases of both projects.”

Following a request for proposal issued by the city last November, City Growth Partners was selected to build Brush House, a two-building rental development with 15,660 square feet of ground-level retail and outdoor space, 178 units, and 127 spaces of underground parking on a 1.1-acre parcel of vacant land bound by Brush, Watson, Beaubien, and Wilkins streets.

The development is expected to cost about $51.3 million and will be designed by New York City’s Morris Adjmi Architects. The building will incorporate green infrastructure, and 20 percent of the units will be set aside for affordable housing.

The Brush 8 will be located at 3119 Brush St., across from Brush House, and will include eight luxury townhouses developed on an empty lot. The project has an anticipated cost of $4.7 million. DEP Design is Washington, D.C., plans to create a massing scale and rhythm that reflects the look of Brush Park during the early 20th century.

Each four-story townhouse will feature a one-car garage, a penthouse setback off the street, and a private rooftop terrace. They will incorporate aspects of both single and semi-detached homes.

“We want to ensure that the voices and stories of Brush Park are not only embraced but also reflected in these landmark developments,” says David Laurence Howell, principal partner of City Growth Partners. “We look forward to finding unique opportunities for integrating the ideas and stories of the Brush Park community into the final construction.”

Both developments are set to proceed through the design, approval, and permitting process between now and August 2019. Groundbreakings are anticipated in March 2019 for The Brush 8 and September 2019 for Brush House.

Brush + Watson, the third development, is slated to add 180 new residential units to the neighborhood in a $45 million development. Half of the units will be set aside as affordable, with about 45 of these available for starting around $1,000 a month to residents making 80 percent of the area median income, or about $42,000 a year.

The project will include 8,500 square feet of street-level retail and 170 underground parking spaces for residents. The project is expected to break ground in late 2019 and to be completed by 2021. OOMBRA Architects is the design team.

“We applaud the mayor’s commitment to affordable housing, especially in a neighborhood where housing costs have climbed so quickly,” says Mike Essian, vice president of American Community Developers Inc. “We plan to use this mixed-income model in Brush Park as a prototype for creating high-quality housing with rents that people can afford in neighborhoods across the city.”