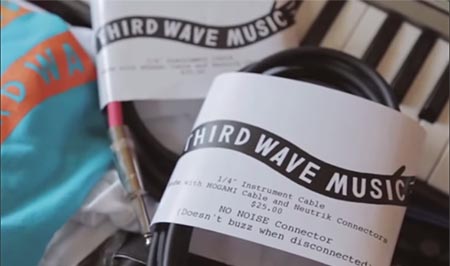 When Jen David moved to Detroit six years ago, she was disappointed to find that the birthplace of Motown lacked an independent music shop. Having worked in music stores since she was a child, David felt frustrated that the downtown area offered no options for purchasing equipment or taking lessons.

And come September 2015 — just in time for the Dally in the Alley celebration — David will open Third Wave Music in the Forest Arms apartment building, located a block away from Wayne State University’s School of Music.

The store will have retail space for instruments and musical accessories, as well as two lesson rooms. There, Detroit Music Teachers Collective, an organization that David belongs to, will provide lessons in saxophone, violin, vocals, guitar, and piano.

Third Wave Music will also host community events and musical workshops in the building’s courtyard. In addition to providing Detroit musicians with lessons, supplies, and repair services, the store will give back to Detroit’s youth, David says. A percentage of all band instrument sales will be donated to public school band programs.

Meantime, David has launched a crowdfunding campaign for renovations of the Forest Arms space, capital for new and used retail accessories, and funding to support Third Wave’s community programs.

Incentives in the campaign include art guitars designed by local artists such as Kate Daughdrill, Rico Africa, Jonathan Rajewski, Davin Brainard, Lauren Rossi Harroun, and Joey Mazzola. “I’m excited for people to get ahold of these unique pieces,” David says.

Third Wave Music also plans to celebrate the campaign with a live music show and silent auction on Nov. 21 at the new UFO Factory in Corktown. Although she is still booking acts, David confirms that Passalacqua as well as her band Mama Roux will perform. Leftover art guitars will be made available at the event.