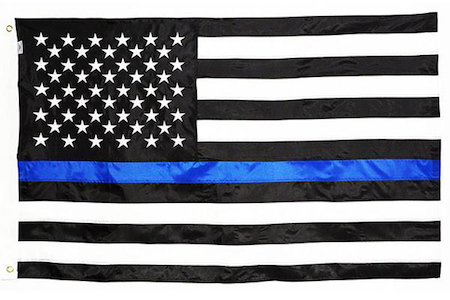 Inspired by the work and commitment of law enforcement officers across the country, Andrew Jacob launched Thin Blue Line USA more than two years ago, to support police officers and their families affected by the loss of an officer. Today, Jacob says the company — through the sale of its recognizable products that include an American flag with one blue line in the middle of the traditional red and white stripes — has donated more than $200,000 to law enforcement nonprofits

“I launched the company two and a half years ago and the flag immediately gained traction across the country as people wanted to show their support for law enforcement and this was a means to do it,” Jacob says. “After launching the flag, I created an entire brand around the thin blue line, but our mission is to help support the law enforcement community and support families of fallen officers.”

Fresh out of college, Jacob began utilizing his user experience degree and business minor to launch Thin Blue Line USA in Ann Arbor, and is now managing his team and the company’s sales, both online and at 130 military, sporting goods, and specialty stores across the country. Its metro Detroit locations include Joe’s Army Navy in Royal Oak and Waterford Township, Harry’s Army Surplus, Ann Arbor Armed, Priority One in Canton Township.

Thin Blue Line USA produces products for law enforcement officers and supporters, based off an American flag with a blue line to signify law enforcement and the black line above and below representing the citizens and the chaos that exists in the country, with the thin blue line standing between the two and protecting the country.

“Officer Collin Rose’s mom was a customer of ours and she bought shirts for Collin and wanted to know if we could donate 1,000 end of watch bracelets and I immediately said ‘yes,’ ”Jacob says. “She dispersed them amongst her family and friends, but then I got the idea of doing a fundraiser with these bracelets, and we ended up raising over $4,000 for Collin Rose’s family.”

Today, Thin Blue Line has more than 10 employees and ships thousands of orders per week across the country. Popular items include the company’s trademark flag, bracelets, T-shirts, pins, and hats. The company is also pursuing interviews with Detroit Police Chief James Craig and other officers for a video series about the realities of working in law enforcement and their role in the communities they serve.

“We’re in a unique spot as the largest national retailer of these products where we have a national voice,” says Peter Forhan, vice president of Thin Blue Line. “We’re working with the DPD to help spread their message about community policing and helping them interact with neighborhoods and kids and get engaged in the community. We don’t think your political views or ideas should be the determining factor in the level you trust law enforcement, so we’re working with them to spread this message.”

More information about Thin Blue Line can be found here.