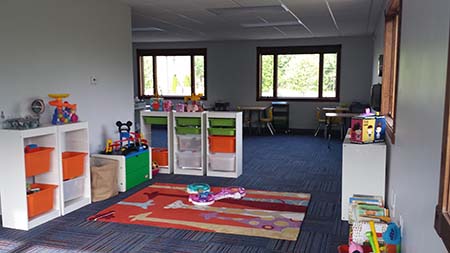 The Sullivan Center, a therapy center for children with autism, severe ADHD, and cognitive impairments, has relocated from Ann Arbor to new offices in Brighton. The owners have plans to open five more centers in Michigan in the next five years.

The center, on Spencer Road and Old U.S.-23, was named after owner Dr. Sara Wine’s son, Sullivan, who was diagnosed with autism before his second birthday. At the time, Dr. Wine says she found very few services were offered for her son and other autistic children in Michigan, so she moved her family to Indiana, where insurance covered therapy for Sullivan.

After the Michigan Legislature passed a mandate for insurance companies to cover therapy for children with autism two years ago, Dr. Wine moved to Ann Arbor to open a therapy center for autistic children.

“All of the Applied Behavioral Analysis centers in Michigan have a waiting list, and all these kids are just waiting to get services,” Dr. Wine says. “It’s my mission to make sure that no other families have to leave the state for their children to get services.”

The Sullivan Center bases its teachings on Applied Behavioral Analysis therapy, a form of behavioral therapy that teaches a child to communicate, learn, and speak.

“We plan on finding areas in Michigan that have a lack of services for autism clients, and going into those communities to build centers,” Dr. Wine says. “Essentially, we’ll do research on areas that have the greatest need for autism, like northern Michigan, the Upper Peninsula, and western Michigan.”