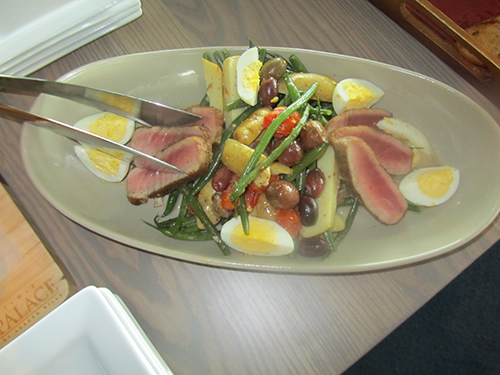 A rebranded and refurbished Palace Grille is among the latest improvements by Palace Sports and Entertainment, which unveiled Wednesday the completed third phase of its multi-million dollar renovations at the Palace of Auburn Hills.

The Palace Grille now features new menu offerings, updated signage, lounge and club seating, flooring and wall treatments, and four large flat-screen televisions. A restructured layout allows the restaurant to accommodate a variety of clients, and hopes to attract more sports or concert goers to a pre-concert cocktail or a dinner afterwards.

“Our hope is for the restaurant to be a much more relaxed setting, and less formal dining (experience),” says Dennis Mannion, president and CEO of Palace Sports and Entertainment. “We want our guests to have an opportunity to come in and have a few cocktails in the lounge areas, put your order in there, and then go to your table. It’s a little different than what we’ve done in the past.”

The new menu features local initiatives including bread from Rochester-based Give Thanks Bakery, cheese and gelato from Ann Arbor-based Zingerman’s Creamery, and products from Mark’s Quality Meats and Culinary Specialties in Detroit. There are also 15 “Michigan Brews” and nine Michigan wines available.

Unlike the former Palace Grille menu, which was fixed and rarely changed with the ongoing events, the revamped version is much more flexible, and is designed to complement the vast assortment of events that take place at the Palace, Mannion says.

Executive Chef Terrance Louzon says the clientele’s needs change depending on what type of event the arena is hosting. For example, he says Piston’s attendees tend to order more elaborate dinners, while concert-goers tend order quick and easy meals.

“We usually have dinner specials for the concerts and we mold those dishes towards the acts,” Louzon says. “For George Straight, for instance, we would have some beef and barbeque type foods. We try to mix the food variety with the flavor of the band.”

The Palace Grille is one of several recently completed renovation projects at the venue that started in 2011-2012, including a new concierge lounge for premium season ticket members, a larger “Party Suite” located on the club and concourse levels, and suite terrace upgrades that incorporate new seating, bar tops, and carpet.

The Palace has also completed the remodeling of the Presidents Club, a lounge comprised of eight separate meeting spaces designed to promote business networking among Detroit business leaders.

“It’s a cozy environment for men and women to come together to bond over a game and combine forces to build business together,” Mannion says. “I’m hoping it serves as way to bring out positive improvement in economic development throughout the city and region just by getting different business leaders together.”