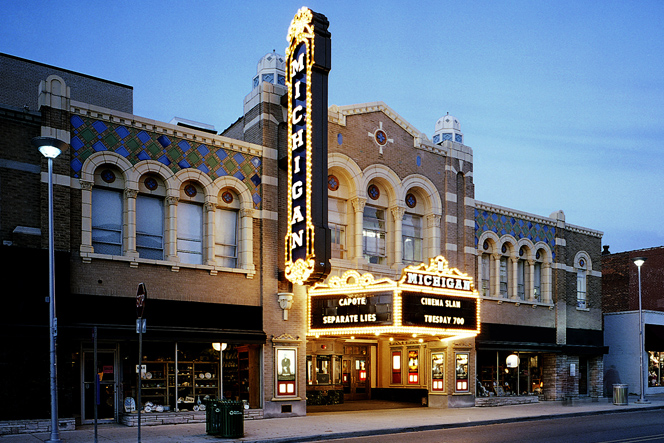 The historic main auditorium temporarily closed at the beginning of July as the Michigan Theater team entered the next phase of the State & Michigan Project, which saw the reopening of the renovated State Theatre in December.

The work will allow for the installation of new seats for the Michigan Theater’s main floor, a modern update of the heating/cooling system, and the initial work on repairing the 1928 Barton Organ’s pipe system.

While no film screenings or live events took place in the auditorium during this time, programming will continue as normal in the screening room, annex cinema, and all four screens at the State Theatre.

When it reopens, the main floor will offer historically-appropriate seats with a significant increase in leg room for all seats. With that increase will come a reduction in seating capacity —t he auditorium will now be able to host about 1,600 patrons at a time, down from the current 1,710 maximum.

The original seats will remain in the balcony for the time-being, featuring the original hardware from the seats’ installation in 1942 and the refurbished cushions from 1986.

In addition, the renovation team will redo the boiler room, and the current system will be removed and replaced with two high-efficiency boilers.

Planned updates to the Barton Organ’s pipe system — in 2014 the keyboard and console were removed, cleaned, repaired, and re-assembled — will continue as well. The organ is one of only a handful of historic pipe organs that remains in its original home.

The campaign reached its financial goal earlier this year. Planned updates for the Michigan Theater include not only the new seats, and repairs and modernization to the heating/cooling systems and the Barton organ, but also much-needed improvements to mechanical systems, as well as accessibility enhancements in the theater’s balcony.

New historically accurate carpeting will be installed, as well as repairs and modernization to the theater’s Barton organ, stage equipment, and lighting.