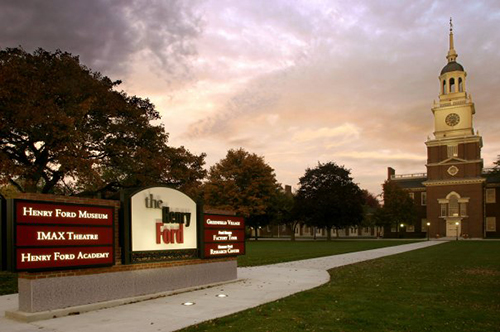 The Henry Ford in Dearborn today announced it has launched a $150-million comprehensive campaign called The Innovation Project. It will help The Henry Ford build digital and experiential learning tools, programs, and initiatives to advance innovation, invention, and entrepreneurship.

“We have an obligation to seize this moment in The Henry Ford’s history by focusing our efforts, far and wide, on high-impact youth learning and development,” says Patricia Mooradian, president and CEO of the cultural institution. “At The Henry Ford, we believe that access to the ideas and innovations that have shaped our country should be available to everyone, regardless of backgrounds and barriers. We want to aggressively and intentionally leverage our unique assets, both physically and digitally, to educate, influence, and inspire tomorrow’s leaders.”

To date, The Henry Ford has raised more than $90 million, and the campaign has already added upgrades and enhancements to Heroes of the Sky in the Henry Ford Museum of American Innovation, courtesy of Delta Air Lines, and the new Davidson-Gerson Gallery of Glass in Greenfield Village and the Davidson-Gerson Modern Glass Gallery in the museum.

Highlights of the campaign for the Henry Ford Museum of American Innovation include new digital experiences and exhibits, including the Racing in America exhibition, and unconventional and entrepreneurial public workspaces on the floor of the museum.

Other highlights include the development and deployment of Innovation and Invention Curriculum to preK-12 schools across the U.S.; connected learning platforms in Greenfield Village and across The Henry Ford’s campus, such as providing a future home for the Detroit Central Farmers Market; The Henry Ford’s two national television series, “The Henry Ford’s Innovation Nation” and “Did I Mention Invention?”; speaker series, town halls, and in-resident programs that offer access to the nation’s leading entrepreneurs and innovators; and the growth and stewardship of The Henry Ford’s 26 million artifacts.