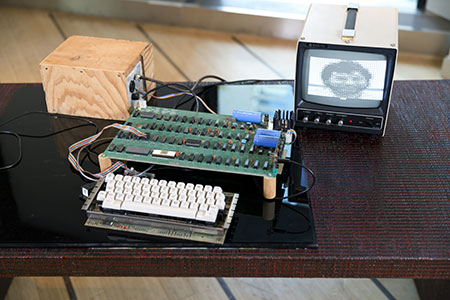 The Henry Ford in Dearborn has acquired an original 1976 Apple-1 computer, one of the first 50 ever produced. The indoor and outdoor history museum purchased the artifact — which is still operational — for $905,000 from the Bonhams History of Science auction in New York City on Wednesday.

“The opportunity to acquire an Apple-1 is a rare one, given their low production numbers,” says Kristen Gallerneaux, curator of communication and information technology at The Henry Ford. “The likelihood that a unit as complete as this will come up for auction is slender. The Henry Ford would have been remiss in holding off much longer in acquiring one for our collection.”

The first pre-assembled personal computer ever sold, the Apple-1 is also the first computer with a keyboard and video display. Its origins began in 1976 at the Homebrew Computer Club in Palo Alto, Calif., where member Steve Wozniak demonstrated his breakthrough design. He teamed up with Steve Jobs and Ronald Wayne, and the trio went on to secure an order for 50 assembled boards, which they assembled within 30 days inside the Jobs’ family home (Wayne left Apple soon after when he sold his share of the company to Wozniak and Jobs for $800).

“When acquiring artifacts for The Henry Ford’s Archive of American Innovation, we look at how the items will expand our ability to tell the important stories of American culture and its greatest innovators,” says Patricia Mooradian, president of The Henry Ford. “Similar to what Henry Ford did with the Model T, Steve Wozniak and Steve Jobs put technology directly in the hands of the people with the creation of the Apple-1, completely altering the way we work and live. The Apple-1 was not only innovative, but it is a key artifact in the foundation of the digital revolution.”

The acquisition also includes a hand-built keyboard interface, power supply, facsimile copies of the owner’s manual and schematics, Sanyo monitor, and Apple-1 Cassette Interface. In addition, there’s a group of printed and video materials related to the Cincinnati AppleSiders enthusiast group, founded by the original owner of this Apple-1, John Barkley Anderson.

The Henry Ford is currently working with Bonhams to bring the Apple-1 computer to its new home inside the Henry Ford Museum. Details on when the computer will be put on permanent display have not been released.

Editor’s note: An earlier version of this article stated that the museum paid $750,000 for the computer. While that was the price of the winning bid, the updated cost ($905,000) reflects the complete price, with premiums included.