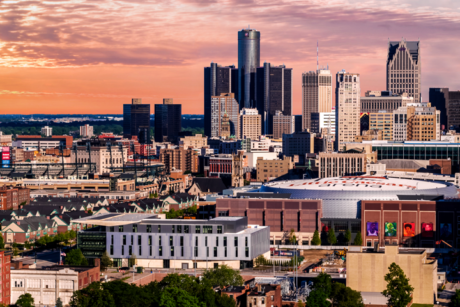 The District Detroit, the 50-block area that includes Little Caesars Arena, Comerica Park, Ford Field, and dozens of other structures, today announced that data from the Detroit Downtown Development Authority shows property taxes in the area grew an estimated 456 percent from 2013 to 2018.

In turn, since plans for the district were announced in 2013, more than 200 new, development projects have been announced nearby with an estimated investment total of $2.8 billion. In addition, since opening in September 2017, Little Caesars Arena has drawn nearly 3 million guests to the city. It also is expected to be among the busiest arenas in the world.

“One year in, the award-winning Little Caesars Arena is an example of the job-creating and economy-building results the community can expect from future investments in The District Detroit,” says Chris Granger, group president of sports and entertainment at Ilitch Holdings Inc., the parent company for Little Caesars Pizza, Detroit Tigers, Detroit Red Wings, and several other businesses.

In the area around Little Caesars Arena, more than $18 million have been invested in the city’s infrastructure.

In his new role, Bradford will oversee strategy, financial insight, leasing activities, and the addition of new jobs for in-house development planning, execution, and construction in The District Detroit.

“Development in The District Detroit has been diverse, deliberate, and successful,” says Bradford. “I am pleased to join a team with such confidence in, and commitment to, Detroit, and we will continue to bring more job-creating development including new residential units and historic redevelopment in properties like the former Eddystone Hotel (northwest of Little Caesars Arena) and the Detroit Life Building (behind the Fox Theatre), as well as restaurants, shops, and more.”

Recently-announced additions to the Columbia Street shopping and dining destination at Woodward Avenue (along the south side of the Fox Theatre and Office Building) include The M Den and Frita Batidos. Both are expected to open in 2019. An additional 40,000 square feet of retail space is currently under construction, which will create a contiguous row of storefronts on the north and south sides of Columbia Street.

Other updates include: Bagley Development Group in Detroit continues pre-construction planning for 150 Bagley St., formerly the United Artists Building, which is expected to be converted into nearly 150 new market-rate and affordable residential units.

Work is already underway in preparation for new, historically-accurate windows at the former Eddystone Hotel at 110 Sproat St., slated for residential units of which 20 percent will be affordable. Olympia Development of Michigan continues to pursue a goal of 20 percent affordable housing across total district residential.

The Detroit-based Brinker-Christman joint venture was selected as the construction management team for three previously-announced historic rehabilitation projects: the 10-story former Detroit Life Building at 2210 Park Ave.; the six-story, Albert Kahn-designed building at 1922 Cass Ave. (just east of the Grand Army of the Republic), and the six-story former Women’s City Club at 2110 Park Ave. (behind the Fillmore/State Theatre).

The $150 million, 9-story Little Caesars world headquarters campus expansion (just south of the Fox Theatre and Office Building) is nearing the final phases of construction and will open early next year, becoming home to 700 employees. The building will enhance research and development and will provide employees with state-of-the-art technology and amenities.

Earlier this year, Olympia Development of Michigan and the Detroit Medical Center announced the Sports Medicine Institute will occupy two floors of a new building at 2715 Woodward Ave., with additional tenants expected to be announced later this year. The building will front Woodward, and be located between Little Caesars Arena and the newly-opened Mike Ilitch School of Business at Wayne State University.