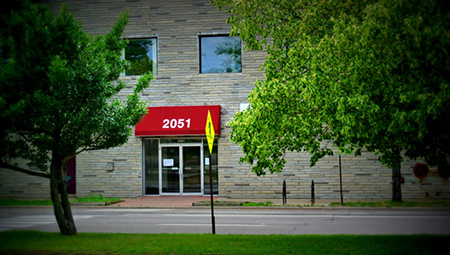 The Alchemy, part of a 110,000-square-foot facility comprised of three addresses and five connected buildings in Detroit’s Corktown, is expected to open with event space and a community pop-up mall by summer 2015.

First on the agenda is the 6,800-square-foot event space, which connects to a commercial kitchen, says Angel Gambino, who purchased the former foundry at 2051 Rosa Parks, just south of Michigan Avenue, about three years ago.

“There’s a really vital use for community centers, (which) I think have just kind of died out,” says Gambino, founder of the Alchemists Collective, a new venture development firm with corporate clients such as Castrol and BP. “So the intention here is to make sure it can be used for trade shows, fundraisers for tenants and other nonprofits, and private events such as bar mitzvahs and weddings.”

So far, the event space infrastructure has been stabilized and cleared of cubicles, walls, and ceilings. For future uses, The Alchemy is soliciting ideas and feedback from local businesses and residents, Gambino says. “It’s blank floors and walls right now, so we’ll need to complete the layout at the end of the public consultation and the architect will draft up the final plans at that stage.”

In total, Gambino’s team is in the midst of developing nearly 20,000 square feet of total warehouse space. “We will open for business in summer 2015 and are currently approaching businesses who want a retail presence in Detroit, but may not want bigger spaces with long term leases yet. Our vision is to offer flexible commercial space at affordable rates to create destination retail in Detroit.”

For bigger brands, the space may be used as a showplace for merchandise and experiential activations, while smaller retailers can use the space as an opportunity to build brand recognition, foot traffic, and sales, Gambino says.

“It was my experience working with thousands of the world’s most recognizable restaurant and retail brands that helped me form some ideas about what might work well in driving economic growth in my hometown,” says Gambino, a former senior vice president of innovation at Westfield, a large shopping mall developer.

“I worked with Westfield on their latest shopping center in an area outside London that was worse off than even our most deeply challenged areas of Detroit. There are now 350,000 people who walk through the doors of that (nearly 1.9 million-square-foot) shopping center every day.

“No one can tell me it can’t be done in Detroit. We just have to hustle harder and think more creatively.”

In the meantime, Gambino is working on a six-part online documentary and TV series with an unnamed British media company. While she can’t name names or cities visited, each episode will focus on how entrepreneurs and innovators are adapting to meet the challenges that come with urban living.

Production is nearly complete for the first two episodes, and Gambino says she may bring the project close to home for one of the remaining episodes. “We’re looking all over the world. We’re hoping that we will find some stories in Detroit or even other cities in Michigan to include in the documentary.”

For more information about The Alchemy, visit facebook.com/2051rosaparks.