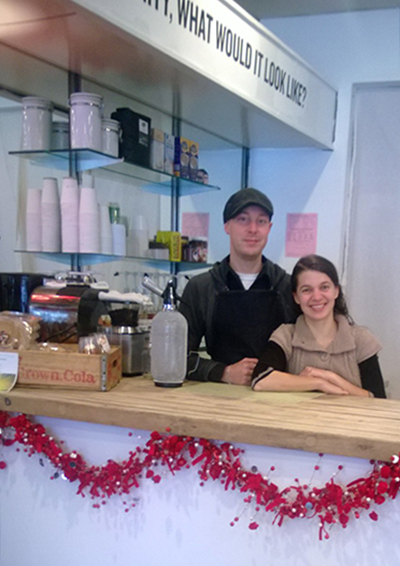 An old-fashioned soda shop opened Friday near Livernois and Seven Mile in Detroit, just three weeks after its owners won first place in TechTown Detroit’s Blocks Retail Boot Camp. The pop-up location, which garnered free rent as part of the program’s grand prize, will be open through Dec. 29.

“This is snapshot of who we are and what we’re doing,” says Billy Shuman, who co-owns Voigt’s Soda House with his wife, Sarah Pavelko. “And for all of the people who have been following us (since winning fifth place in the 2013 Hatch Detroit contest), it gives them a chance to come and try our product.”

The soda shop — which includes spiced ginger beer and cranberry-cider Sinterklaas shrub on its menu — is the result of a three-year-long project between Shuman and Pavelko. Besides looking to secure a permanent location for the soda house, the couple hopes to build Voigt’s into a catering and special events company.

“It’s (can be) a fun event for an office party or anything like that,” says Pavelko, who creates most of Voigt’s homemade syrups, including lavender lemon and Russian Tea, a combination of orange juice, black tea, and cardamom. “We bring soda siphons and mix the sodas fresh for you. All of the syrups are homemade. It’s a fun presentation. People get a kick out of it.”

Based on the findings of their research, Shuman says the couple would like the business to be located downtown, specifically in Capitol Park. “But who knows, if it goes really well this month, maybe we’ll stay here,” he says.

For now, Shuman says he’s using the Livernois location to gather as much feedback as he can. “We’re throwing out all of these different sandwiches and soups, and they’re not your typical ham and cheese sandwich. We’re sprucing them up, making them more creative and foodie-like. So when I’m serving (the food and drinks), I’m asking ‘Was it good? Was it served at the right temperature?’ ”

Voigt’s isn’t the only business represented in the pop-up space. The couple asked April Cobb of Tender Moments, who sells specialty gifts for baby showers, bridal showers, and weddings and also participated in TechTown’s boot camp program, to join them. “(The site) is a big space, so there’s no way we could fill it ourselves. It’s been great to get a complementary business to help draw in traffic,” Pavelko says.

TechTown Detroit’s Blocks Retail Boot Camp is an eight-week program that prepares entrepreneurs with strong retail concepts for the launch of their Detroit businesses within six months to one year of program completion. For more information, visit techtowndetroit.org.