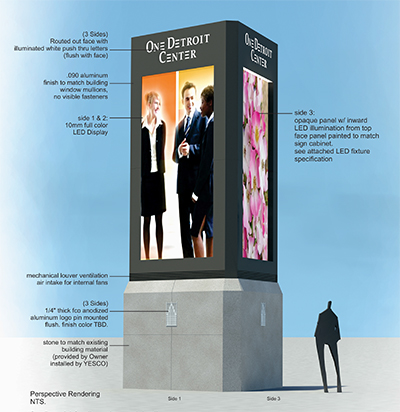 In a first for the region, One Detroit Center, an iconic Class A office structure in downtown Detroit, will unveil a three-sided LED monument sign that will highlight tenants and downtown activities. Mounted on a granite base, the 25-foot-tall sign will feature two large color LED screens at the northeast corner of Woodward and Larned, a half block north of the Spirit of Detroit statue.

David T. Miller, an associate broker and principal at Signature Associates in Southfield, said the sign would be operational by the end of the year. While the General Motors headquarters at the Renaissance Center has a smaller version of an LED sign, it only features GM products.

At One Detroit Center, each screen will be 13 feet high and nearly 8 feet wide and set flush within an aluminum cabinet that matches the building’s window mullions. Offering 10mm full color LED screens, the $500,000 electronic monument will be visible for several blocks. In addition, a graphic silhouette of the building will be set within each side of the granite base.

The sign is part of a major upgrade at the 45-story structure, which is majority owned by iStar Financial. Signature Associates serves as property manager and leasing agent of what is Michigan’s tallest office building. In recent months, new offerings include an indoor bistro, an outdoor cafe, valet parking, an upcoming fitness facility, and a future stop along the M1 Rail line that will run along Woodward Avenue from downtown to New Center.