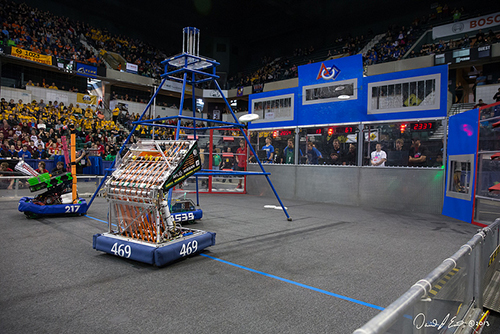 The 280 Michigan high school robotics teams participating in the FIRST (For Inspiration and Recognition of Science and Technology) Robotics Challenge will find that “teamwork” takes on a new meaning this season.

This year’s challenge, called Aerial Assist, will be played by two competing alliances of three robots each. The objective is to score as many balls in goals as possible during two minutes and 30 seconds. However, alliances receive large bonuses for “assists,” which are earned for each robot that has possession of the ball in a zone as the ball moves down the field.

“The students who participate … are not only building robots; they are building character, self-respect, and relationships with their peers,” says Dean Kamen, the competition’s founder. “Winning the game is fun, but the importance of FIRST is that you’ll get much more out of it than you put in, and it’s going to change the rest of your life.”

The FIRST competition, founded in 1989, is nationwide, with Michigan leading the way with 280 teams, up from 203 last year. California is second with 237 teams.

“Adding so many new teams this one year is a tribute to the needed growth in STEM (Science, Technology, Engineering, and Math) education opportunities to keep our students strong and in position to secure brighter professional futures,” says Francois Castaing, chairman of the FIRST in Michigan Board.

Michigan teams have been on the winning alliance in eight of the last 10 National Championships. To read the 2014 schedule, click here.