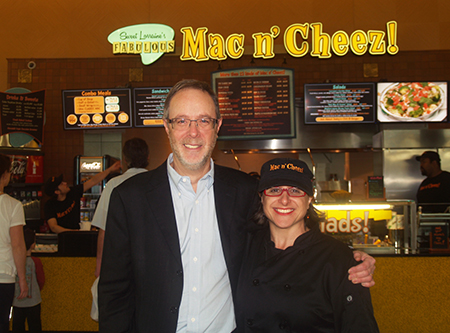 “We are entrepreneurs and we love the restaurant business — we are always thinking about new ideas, the next big thing,” says Platman, who for the past 30 years has heard plenty of suggestions to open more eateries. “If I was going to open up something, it was going to be smaller and easier to manage.”

Randy Dickow of West Bloomfield, who plans to open a yet to be named second location in metro Detroit, will operate the Renaissance Center franchise.

Already, Sweet Lorraine’s operates two corporate-owned Fabulous Mac n’ Cheez! locations, one in the Somerset Collection in Troy, and the other in Great Lakes Crossing Outlets in Auburn Hills. Additional corporate locations in Toledo and East Lansing are scheduled to open by the end of the year, with plans to secure 10 to 12 more franchised locations in the next 18 months.

Platman first began her business in 1980 preparing baked goods in her kitchen and selling them to restaurants and caterers. She opened Lorraine’s Deli in 1982 followed by a full-service café and bar two years later.

To read more about franchises in Michigan, read 2013 Michigan Franchise Report by Kelly McLaughlin and Marissa Russo, which was featured in the Sept.-Oct. 2013 issue of DBusiness.