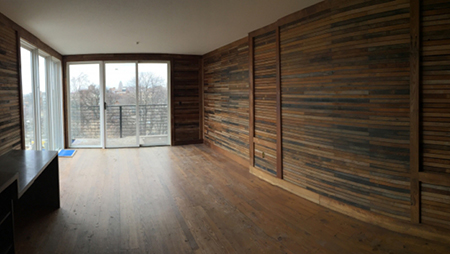 Two eco-friendly, sustainable projects will open in Detroit’s Midtown district in the coming months: El Moore, a sustainable urban living community that offers apartments and lodging, as well as a renovated alley with historic bricks, LED lights, and native landscaping, which will open next week.

The alley is located between Alexandrine and Selden, running from Second to Third, near the restaurant, Selden Standard. Midtown Inc., a nonprofit development organization, launched a crowdfunding campaign a year ago to raise money for green alleys throughout Midtown, and raised $200,000 for the alley near Selden and Alexandrine.

“There are a lot of existing alleys that are in very poor condition sitting next to other major investments that are being made,” says Sue Mosey, president of Midtown Inc.

Mosey says the renovations are designed to make the city more walkable by increasing safety with lighting but they are also designed to be eco-friendly because they allow urban runoff and rain to go directly into the ground instead of into the city’s sewer system via permeable pavers.

El Moore, at the corner of Second and West Alexandrine, will begin renting units in the next few months. The building will offer units for both long-term residents and overnight guests. El Moore has super-insulated walls and ceilings, geothermal heating and cooling, energy efficient appliances, and solar panels, all in an effort to make it a more sustainable living option.