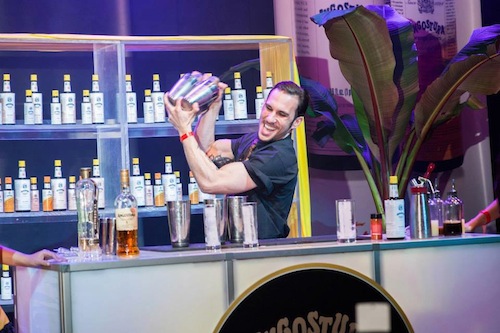 Yani Frye hopes to shake — or at least stir — things up at the annual Angostura Global Cocktail Challenge, to be held this weekend in Trinidad and Tobago. Representing the United States, the general manager and head bartender of Sugar House in Detroit will opt to make 10 drinks, rather than the required eight, in a seven-minute time span.

“Technically, all of the competitors have had to submit two new drinks,” Frye said Thursday in a phone interview, prior to flying from New York to the competition. “But I’m also going to do my original two for the judges because my original drinks are a continuation of the previous two. So they all kind of go together and progress in taste and drink.”

During the finals, Frye will make one drink each of The Room Key and the Morning After — the drinks that won him the U.S. Finals of the Angostura Bitters Cocktail Challenge, held last July. He will also make four drinks each of his new submissions: The Kiss Goodbye and The Lasting Impression.

While Frye says his favorite rum drinks are usually more simplistic — for example, an Angostura bitter daiquiri, composed of rum, lime juice, grenadine, and bitters — but the cocktails he has designed for the challenge are a bit more complicated, he says. The Lasting Impression, for instance, will be smoked over a motorized smoker and uses ground Angostura-infused beechwood.

“It’s the world finals, so I figured I’d go all out,” Frye says.

Frye will be competing against bartenders from across this world, each vying for a $10,000 prize and a two-year contract as an Angostura Global Brand Ambassador. But if anything, Frye says he hopes the attention his drinks have received through this competition will bring a little more recognition to the city of Detroit, and maybe inspire others to be more open with rum-based drinks.

“There’s been a lack of excitement about rum,” Frye says. “People have shied away from it, going to more of the vodka and the gin, more of the cleaner stuff. I think it would be fun to have a little resurgence in classic rum drinks that aren’t so cheesy — bring it back to where it used to be with super old school, simple, no-umbrella-style drinks.”

The Room Key and the Morning After are both currently available at the Sugar House, located at 2130 Michigan Ave. in Detroit. The Kiss Goodbye and The Lasting Impression will be added to the menu sometime after Frye’s return in March.