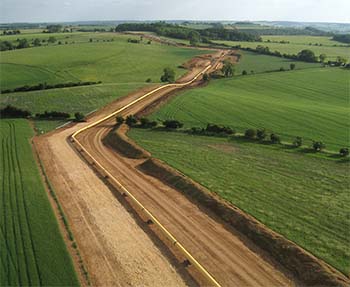 Two new proposed natural gas pipelines will benefit agricultural producers in Michigan and other states in the Midwest with stable energy prices, says a study released today by the Ohio State Grange, an agricultural advocacy group.

“Farmers across our region and country are projected to face falling agricultural commodity prices,” says Gary Wolfram, a professor of economics at Hillsdale College, who conducted the analysis along with Charles Steele, an associate professor of economics. “Natural gas is a major component of farming operations and expenses. Building new natural gas infrastructure can reduce costs for farmers by increasing access to affordable natural gas.”

The proposed $4.3 billion Rover pipeline that would run through Michigan and other states could begin construction next year. The pipeline, estimated to run about 800 miles, will deliver 40 percent of its daily volumes of natural gas to multiple delivery points in the state. The proposed pipeline would run through Lenawee, Washtenaw, Livingston, Shiawassee, Genesee, Lapeer, Macomb, Oakland, and St. Clair counties. The proposed Nexus pipeline would run about 250 miles through Michigan, Ohio, Chicago, and Ontario.

Wolfram says farmers can no longer rely on getting high prices for their crops, so they must control production costs and lower expenses. He says one of the likeliest sources of potential cost savings for Michigan’s agricultural industry is the expanded use of natural gas. Energy is a major component of farm production expenditures, accounting for more than 30 percent of costs.

He says transporting natural gas via a pipeline is safer, cheaper, and more efficient than transporting it via trucks and railcars, and helps to drive down the overall price. Wolfram says natural gas is a cheap and efficient energy source that has the potential to reduce energy costs, given it is less subject to price volatility and market risk than other energy sources. In addition to being a stable source of affordable energy, he says natural gas is also cleaner than alternatives such as coal or oil.

Wolfram says the primary risk associated with natural gas pipeline development is the risk of rupture with the possibility of explosion and fire, but he says the risk is minimal.

The full study, Natural Gas Pipeline Infrastructure and Its Impact on Michigan and Ohio Agriculture, is available here. â€‹