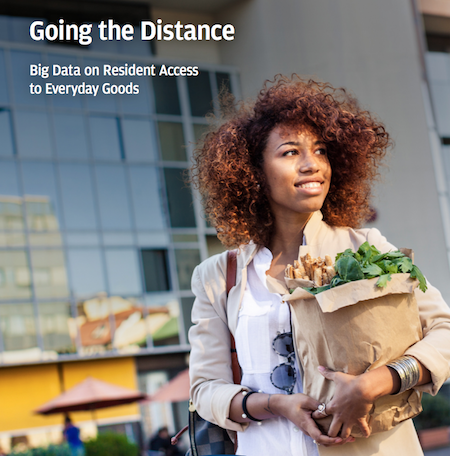 Researchers at multinational banking and financial services holding company JPMorgan Chase Institute released a new research study today examining where Detroit residents do most of their shopping, and found that most regularly travel more than 20-minutes to purchase their everyday goods from grocery and clothing stores.

The report, authored by Diana Farrell, Lindsay Relihan, and Marvin Ward, defines a 20-minute neighborhood as “one in which a predetermined set of amenities can be reached within a 20-minute walk or bike ride. While this tactic is useful, it is not enough to know whether or not residents need to travel outside of their neighborhood to make purchases.”

According to data from the report, in 2016, Detroit residents made 71.6 percent of their overall transactions outside of their 20-minute neighborhoods. Additionally, the distance between residents and their chosen merchants was longest for low income residents (up to 15.4 percent longer) and shortest for high income residents. However, the overall distances between Detroiters and their chosen merchants dropped from 2.2 to 2.1 miles from 2013 and 2016. Furthermore, research indicates that Detroit residents were closest to their chosen pharmacies and farthest from their chosen clothing providers, though distances to grocery stores, nondurable providers, and pharmacies also decreased overall from 2013-2016.

“The JPMorgan Chase Institute explored the time costs of local, commercial activity, and the data revealed that access to retail is a complex issue that can be better addressed by understanding where and how often people actually shop,” says the report. “We found that significant variation in the distance between residents and their chosen merchants (i.e. merchant distance) exists across product types, and the merchant distance tends to be shorter for high-income residents.”

The authors add that the concept of a 20-minute neighborhood is “a useful tool that can convey real information about access to retail within a city,” but that its outlook can cause blind spots that may lead to “problematic allocations of investment resources.” They feel knowing the actual distance residents travel to complete their shopping can help decision makers prioritize future investments.

The full report can be viewed here.