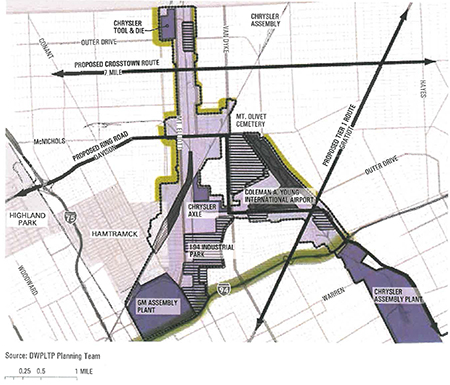 The city of Detroit and the Detroit Economic Growth Association will develop a comprehensive strategy to revitalize the Mount Elliott Employment District following a $600,000 grant from the U.S. Department of Commerce Economic Development Administration.

“Upgrading the Mount Elliott Employment District into an attractive industrial area will reinforce our region’s role as a global hub for manufacturing,” says Mayor Mike Duggan. “It also will support our mission to provide ample employment opportunities for Detroiters.”

Today, the district, which runs from I-94 along Van Dyke and Mt. Elliott roads to Eight Mile Road, is home to an estimated 1,700 businesses that employ nearly 15,000 people. It is the city’s single largest industrial corridor by employment, say officials.

“The plan will be a replicable process for improving other employment districts within Detroit that will have lasting impact,” says Kenneth Cockrel, Jr., executive director of the Detroit Future City Implementation Office. “And, we’ll be creating approaches that our regional and national peers can learn from.”

The city of Detroit and Detroit Economic Growth Association will provide an additional $100,000 of in-kind contributions, staffing, and $50,000 to pay for a portion of projected contractual expenses for the project.