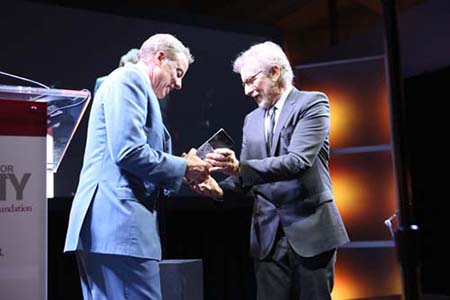 Filmmaker Steven Spielberg, founder of the USC Shoah Foundation, Thursday night awarded Bill Ford Jr., executive chairman of Ford Motor Co., with the organization’s highest honor, the Ambassador for Humanity Award, at its annual gala. Ford is teaming up with the foundation to expand its IWitness program, an educational website with testimonies of survivors and witnesses of the Holocaust, to the Detroit area.

“The work of USC Shoah Foundation is incredibly inspiring, as it is making a huge difference in so many people’s lives,” Ford said during the event. “We are excited to partner with USC Shoah Foundation to engage young minds, bring history to life, and encourage today’s youth to build a better future.”

Also in attendance at the gala, held at the Henry Ford Museum in Dearborn, were actress Halle Berry, known for her role in Monster’s Ball and the X-Men film series and actor Steve Carell, of the TV show, The Office and Anchorman fame. Grammy Award winner James Taylor provided guests with a special musical performance.

“It is an honor to have the support of these three iconic artists, each role models in their own right, to help us pay tribute to Bill Ford,” said Spielberg, chair of the annual gala.

About 100 educators in Michigan use IWitness, which has more than 1,500 full life histories and testimonies of survivors. Ford Motor Company Fund’s $180,000 contribution will help to expand the program to more schools in the area. The Fund will also chair an advisory committee that will facilitate the program’s mission.

Ford was the sole sponsor of the 1997 NBC broadcast of Spielberg’s Academy Award winning Schindler’s List, a historical drama based on the life of Oskar Schindler, a German businessman who saved the lives of Polish-Jewish refugees during the Holocaust by employing them in his factories. The movie inspired the Shoah Foundation’s Institute for Visual History and Education.