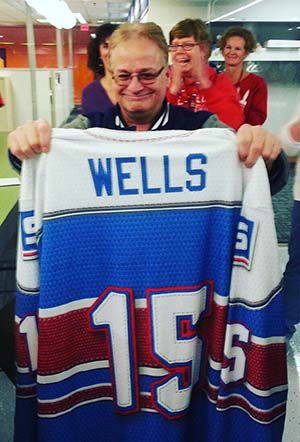 The Red Wings alumni will play against a team from Sterling Heights-based Stahls,’ a manufacturer of garment decoration equipment including jerseys for professional, college, and high school sports leagues, among other organizations.

“We decided to engage with the Detroit Red Wings Alumni Association because (the game) is for charity and all of the money raised goes toward the Clark Park Coalition,” says Carleen Gray, vice president and chief marketing officer at Stahls’. “We are a 13-year licensee of the National Hockey League. We manufacture every Bauer Hockey jersey that’s sold. (Hockey is) in our DNA — it’s an absolute perfect fit for us.”

St. Clair Shores-native Mark Wells, a retired American ice hockey forward who was a member of the gold medal 1980 U.S. Olympic hockey team, will coach team Stahls,’ which includes a mix of Stahls’ employees and their family members.

The game, held at 12:30 p.m. Saturday, is part of the Frozen Fish Fiasco, an annual set of outdoor hockey games that pit amateur teams from different metro Detroit youth hockey organizations against one another.

The Detroit Red Wings Alumni vs. Stahl’s game will be broadcast on the Fox Sports Network next month.