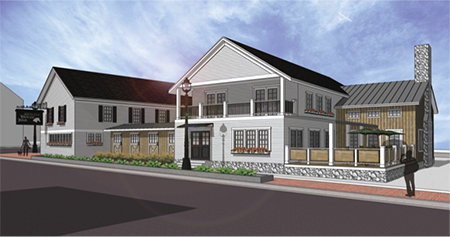 Renovation of the state’s oldest continuously run restaurant — the White Horse Inn in Metamora — is nearing completion with a re-opening planned in late September or early October. This week, famed Parisian artist Jean Louis Sauvat is painting a horse-themed mural in the dining room.

“We are striving for excellence through responsible renovation — to not simply re-create the past, but to be honest and authentic through our choice of materials and their sources, the simplicity and integrity in design, and the exhaustive search for the right furniture and fixtures,” says co-owner Linda Egeland. She and her husband, Victor Dzenowagis, also own several metro Detroit restaurants, including the Moose Preserve Bar and Grill in Bloomfield Hills and Camp Ticonderoga in Troy.

“When finished … The White Horse Inn will serve true field to table fare, with re-imagined menu classics that will span the 165 years that the White Horse served food and drinks,” she says.

On the menu will be well known items from the restaurant’s past (i.e. bread pudding and spinach dip) as well as historically significant recipes that have been updated for the present day, says Dzenowagis, noting that his wife has been turning to the Laura Ingalls Wilder cookbook for inspiration. “There’s a lamb stew, and she’s working with gingerbread for some of the desserts.”

He adds that the restaurant will have many of the staples served at their other restaurants, including fresh fish, barbecue ribs, and chocolate chips cookies. “We’re also making contact with local farmers, so we’ll have true field-to-fare specials and ingredients. I think it will be exciting and approachable. There will be enough variety for people to come multiple times a week and interesting enough for people to drive up from Rochester or Birmingham,” Dzenowagis says.

The renovated building — which first opened in 1850 and also served as a stagecoach and railroad stop, livery, hotel, brothel, and was part of the Underground Railroad — will feature several materials sourced from nearby forests and farms, based on the vision of Tamas von Staden, principal of von Staden Architects in Royal Oak. A local landowner, for instance, donated stones from an 1880 dairy barn foundation on his property to be used in the wood-burning fireplace.

For the building’s woodwork, the owners have turned to John Yarema, who has overseen flooring projects for institutions including the Detroit Institute of Arts and the U.S. Supreme Court in Washington, D.C. Like Yarema, Sauvat — a designer for Hermès, with pieces in Hermès Museum in Paris — agreed to take part in the project for a reduced fee, Egeland says.

In preparation for the upcoming opening, The White Horse Inn is currently hiring for positions including cooks, servers, bartenders, hosts, and dishwashers.