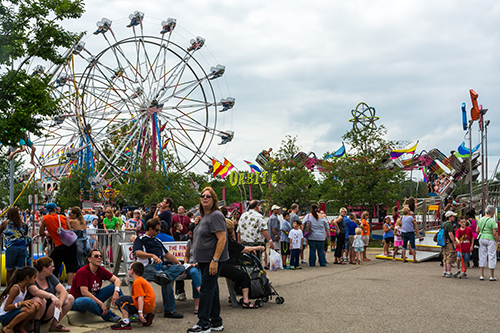 Fairgoers to this year’s Fifth Third Bank Michigan State Fair — to be held Labor Day weekend (Aug. 29-Sept. 1) at the Suburban Collection Showplace in Novi — will find the event’s geographic footprint is 20 acres larger than the year prior, making room for more attractions, live entertainment, and food exhibitors.

In addition, Arnold Amusements of Traverse City has invested $2 million in upgrades to its carnival, which will include more than 40 rides this year.

“We’re going to do whatever we can do to make the state fair grow year after year,” says Steve Masters, the fair’s executive director.

Additionally, the first-ever State Fair Superstar talent contest will be held. The winner will be the headline performer for the event on Sunday evening and will receive $2,000, songwriting coaching, and professional consultations.

Event officials report that last year’s fair saw a 60 percent increase in attendance over 2012, as well as an upturn in volunteers, exhibits, and in sponsors. The numbers are likely to rise again this year, says Blair Bowman, principal of the Suburban Collection Showplace and of the fair.

“The fair will be bigger and better because of the success of last year and the response we have received from those participating and attending,” says Bowman, noting that the event donated more than $250,000 to community organizations and notable causes last year. “We plan to continue that this year.”

Masters says the fair will continue to grow while restoring state traditions in its own, new way. Take, for instance, the State of Michigan Butter Cow tradition. This year, sculptor Tom Paul Fitzgerald will transform hundreds of pounds of butter into artwork.

Also revived is the goal-driven youth scholarship program, which will increase to $30,000 from $20,000 in 2013, as well as performances and parades at the on-site Shrine Circus.

For more information about the fair, visit MichiganStateFairLLC.com.