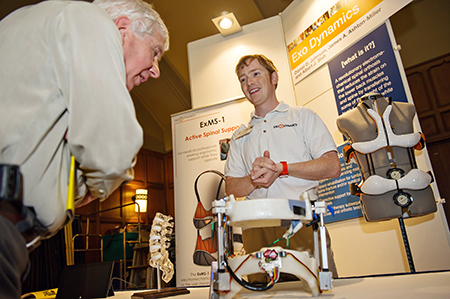 Researchers at the University of Michigan’s Tech Transfer office, have reported more than 400 new inventions this fiscal year, up nearly 4 percent from the previous year. Additionally, the university reported a 37 percent jump in option and license agreements as well as the launch of 14 startups, bringing the number of businesses launched in the last five years to 55.

“It is gratifying to see these record-setting metrics for, not just one, but several indicators of tech transfer performance,” says Ken Nisbet, U-M’s associate vice president for research–technology transfer. “This is a reflection of the creativity of our researchers, the resourcefulness of our tech transfer team, and the contributions from our partners in the university, business, government, and entrepreneurial communities.”

This year’s startups, launched through Tech Transfer’s Venture Center, include Mia Motors, which makes energy storage and wireless charging systems for electric vehicles; ONL Therapeutics, which is developing therapeutics for retinal diseases; and Court Innovations, creator of online-guided negotiations between courts and residents.

Last year, the university was issued 132 U.S patents, up slightly from 128 in 2013. Likewise, the school received $18.5 million in licensing revenues in 2014, an increase from $14.4 million in the previous fiscal year, thereby providing funds to reinvest in research and innovation, says S. Jack Hu, U-M’s interim vice president for research.

“With more than $1.3 billion in research expenditures annually, U-M is one of the world’s leading research universities,” Hu says. “These results in technology transfer highlight not only the growing productivity of our faculty in generating innovative ideas through their research, but also our ongoing commitment to making sure that these ideas will benefit our state and nation in the form of new or better products, processes, and services.”

The university will recognize the faculty and researchers engaged in the technology transfer process at the 14th annual Celebrate Invention reception, to be held Oct. 29 at the U-M Michigan League Ballroom. Kiosks representing the range of innovation and entrepreneurship from U-M Tech Transfer activities will be on display at the event.

Admission is free but registration is required. For more information, visit techtransfer.umich.edu/registration.