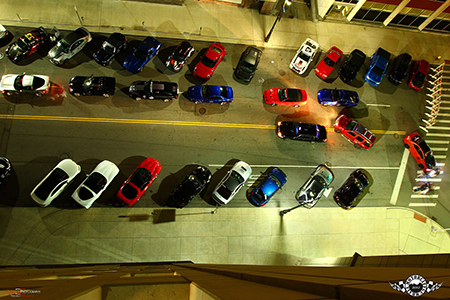 The Motor City Rally Club is bringing more than 100 custom and high-end cars to the streets of downtown Detroit for a timed road rally that will depart for Chicago on Aug. 23 and return back to Campus Martius Park the next day.

Now in its third year, the Motor City Gumball Rally will take participants — competing for cash and prizes — along a secret route, stopping for checkpoints and challenges along the way.

“It’s a tiresome event,” says Waseem Qureshi, president of the Motor City Rally Club. “You never think of driving as physically demanding, but when you’re doing what these guys are doing, it is.”

Once on the highway, teams will use a mobile app to gather clues leading them to various checkpoints, where they must complete a task to proceed. In past years, challenges have included parallel parking while blindfolded (following directions provided by a co-driver), playing corn hole while zip lining, or racing on a drag strip.

While he won’t divulge any of this year’s challenges, Qureshi says participants have been notified to bring an extra change of clothes for the second day. “They’re going to be getting pretty dirty at one of their checkpoints,” he says.

Although time is a major factor in the event, the club does not condone or encourage speeding. In fact, it’s a sure way to lose points. “We’re working with Driver Buddy, which has created software for us so we can track every single team and where they’re going at any given time within a five-second interval and within 10 feet of where they’re at. Based off of that, I’m able to see whether or not the teams are breaking the speed limits and can send them notifications that say, ‘Hey guys, chill out.’”

The rally also discourages phone use while driving, which is why at least two people are required to form a team. While one person researches clues and navigates, the other can stay focused on the driving.

Eventually, the teams will make their way to downtown Chicago for the night for food and festivities. The next morning all teams will be released to navigate a second secret route with timed checkpoints.

The rally will come to an end Sunday evening, and the general public is invited to join the festivities and mingle with the drivers. On-site activities will include live graffiti, music, refreshments, and contests.

Noting that the participation has more than doubled since the rally first launched in 2012, Qureshi says he has big plans for next year’s event, which will travel from Detroit, Pittsburgh, Washington, D.C., and New York City over a period of three days.

A portion of proceeds from this year’s rally will be donated in honor of the late actor Paul Walker and his charity, Reach Out Worldwide. A toy drive will also be held in which all participating teams and those entering the arrival party car show will donate a new toy to the Southeast Michigan Toys for Tots Foundation.