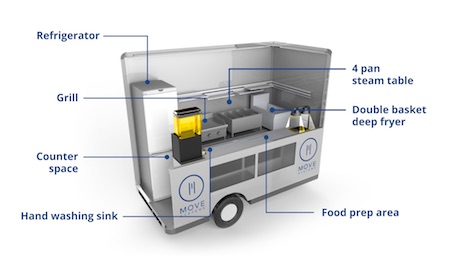 Move Systems will invest $13.3 million to increase production, add machinery and equipment, and expand administrative areas at an existing facility in Walker. The MEDC is supporting Move System with a $200,000 performance-based grant.

The announcement also included the creation of 27 new jobs as part of the first economic development project success for the partner organizations, The Right Place, Start Garden, and Wakestream. Though they’ve collaborated on several initiatives in the past, this is the first early-stage corporate expansion collaboration resulting in direct new jobs and investment.

Created in 2016 under the leadership of Michigan native and U.S. Army veteran James Meeks, Move Systems has experienced rapid growth due to its popular eco-friendly food cart, the MRV100, and its electricity pedestal, Simple Grid. The food cart, which has been constructed for street vendor use in New York City, is outfitted with a solar roof, propane gas, lithium battery, refrigerator, grill, handwashing sink, steam table, double basket fryer, and counter space for serving and food prep.

“Michigan has the manufacturing talent and capabilities, combined with a venture capital market that also understands our goals to create cutting edge, smart, connected technologies and systems for our urban environments,” says James Meeks, CEO of Move Systems. “Furthermore, we are committed to building social equity in the local communities where we operate, so we are excited to expand here in the area and continue that mission.”