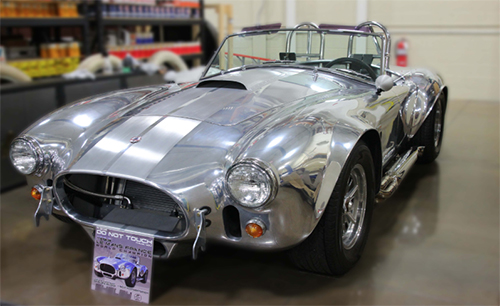 The Stahls Automotive Foundation, which honors area veterans, along with current military service men and women and their families, will host its annual Power Play for Heroes two-day event this weekend.

The festivities will kick off on Saturday with Team STAHLS’ facing off against the Detroit Red Wings Alumni at the St. Clair Shores Civic Arena. Sunday will mark the fifth annual Veterans Day Open House at the Stahls Automotive Collection in Chesterfield Township.

Veterans Day is a time of year for many veterans to reflect upon their experience, including Dan Robinson, a former U.S Army military police soldier and current operations manager for STAHLS’ Manufacturing and Engineering Center (MEC).

Six months after beginning a career at STAHLS’, Robinson received notice of a one-year deployment to Guantanamo Bay. Robinson’s first worry was informing his new employer of the leave and the next was about the future of his career.

Robinson found this out after a life-changing year overseas, where he found his job and team members waiting for him upon his return. Robinson has spent time working at STAHLS’ and a few other companies throughout the world but no matter where he went or what he experienced, Robinson always found his way back to STAHLS’.

“I had experienced every aspect of the industry — from services, to decoration, to garment supply, and raw material supply — but I missed being a part of the STAHLS’ family because of the way they value and care for their employees,” says Robinson. “Going into the military was my passion growing up, so I feel lucky to have found a company to work for that honors my service and allows me to grow professionally and personally as a veteran.”

For the second consecutive year proceeds from the weekend’s events will benefit Michigan-based veterans and first responder recipients of Guardian Angels Medical Service Dogs. The organization is a 501(c)3 nonprofit dedicated to raising, training, and donating medical service dogs to veterans and first responders suffering from PTSD, traumatic brain injuries, and other medical needs. The Stahl family will be matching all donations made throughout the weekend.

“Many of my family members served in the military, and even though I couldn’t, I have always tried to find as many ways as possible to support our troops and veterans through our annual event,” says Ted Stahl, executive chairman of STAHLS’ and founder of Stahls Automotive Foundation. “Our Veterans Day tradition is one that is close to my heart and the hearts of the entire STAHLS’ team. We are honored to work with Guardian Angels Medical Service Dogs for the second year. Their support for veterans is exceptional and they are every bit deserving of these donations.”

To kick off the weekend celebration, STAHLS’ employee team faces off against the Red Wings Alumni team on Saturday, Nov. 10. In addition to watching the excitement of the game, fans will be able to browse memorabilia on sale from the Detroit Red Wings Alumni Association and DC Sports. Fans will also be able to partake in a variety of photo opportunities including a chance to take a photo with the legendary Ted Lindsay and Ted Lindsay trophy and enjoy a cold drink in the Lions Club beer tent just off the side of the arena.

The game is open to the public. Tickets can be purchased onsite for $10. All ticket sales will directly benefit the Guardian Angels Medical Service Dogs who will be onsite selling 2019 calendars featuring dogs in the program including Babe, named by STAHLS’ for their donations from the 2017 Power Play for Heroes events.

The second stop for this honorary weekend will take place at the Stahls Automotive Collection on Sunday, Nov. 11. Visitors can bring the whole family for a ride through history, exploring the museum’s collection of nearly 100 classic and vintage vehicles.

In addition to its extensive car collection, the museum is also home to an array of unique music machines ranging from jukeboxes of various eras to the world’s largest dance organ, the 1920 Gaudin 125-Key and the 1924 Wurlitzer Pipe Organ, which will be played live.

The Detroit Arsenal of Democracy will loan an array of wartime memorabilia and military vehicles for display on the museum grounds and create custom dog tags for attendees.

The event is free and open to the public; however, a $5 donation is encouraged. For more information, visit stahlsauto.com/veteransday18.