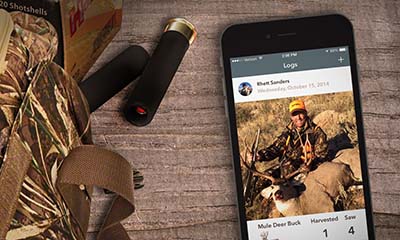 Grand Rapids-based technology company Sportsman Tracker has unveiled an upgraded version of its map-based mobile app, which allows outdoor enthusiasts to track wildlife movement and identify the best times to hunt or fish.

“Now, with a completely rebuilt mobile app featuring the world’s most advanced forecasting algorithm, we can offer (data) logging not just for whitetail and common fish, but for over 200 game species, and we can now more accurately predict when success is most likely to occur whether you’re hunting whitetail or fishing for bass,” says Jeff Courter, co-founder and CEO of Sportsman Tracker.

Courter says the app first launched in 2013, and has made more than five million predictions in nearly 2 million locations using environmental variables such as weather patterns and the sun and lunar calendars.

He says the newest version of the app offers a one to five star rating for where to hunt and fish, using an algorithm to analyze the behavior and movement of hunting and fishing species for each GPS plotted location. Other predicting tools include a 10-day forecast with hour-by-hour information and a database of lake contours in more than 18,000 lakes and rivers.

Courter and co-founder Jon Schwander are debuting the new, free app this week at TechCrunch Disrupt in San Francisco, an annual conference where technology companies pitch their product in front of investors and media.