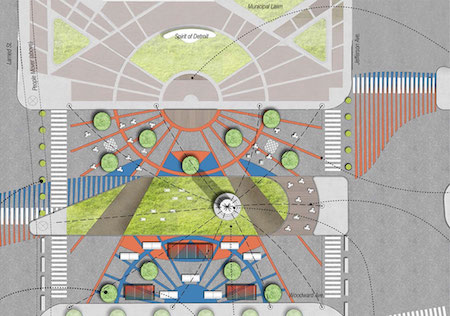 Detroit Mayor Mike Duggan and other community leaders today launched the newly-renovated Spirit of Detroit Plaza. Located two blocks south of Campus Martius Park, the $300,000 plaza that spans both sides of Woodward Avenue, highlights the city’s history and diversity, as well as improving foot traffic near the riverfront.

The 20,000-square-foot civic square is intended to be a place for people to interact while learning of local initiatives and cultural attractions. It is Detroit’s first public space of the sort. City officials hope the initial period of the plaza’s opening will mimic results by other cities who have created similar spaces.

“Every world class city has a central plaza where people can gather and celebrate its civic history, and in front of the Spirit of Detroit is the perfect place for all Detroiters to have that opportunity,” says Duggan. “We are committed to a Detroit that’s open and accessible to all and this new plaza has been envisioned to celebrate the diversity that makes our city so great.”

In addition to civic pride, the plaza also aims to improve walkability, increase access to public spaces, and create new business development. Given the plaza occupies Woodward at Jefferson Avenue, vehicular traffic will be directed to neighboring streets.

“We anticipate growth by planning to move an increased amount of vehicular traffic through downtown more efficiently while at the same time encouraging other kinds of mobility,” says Maurice Cox, Detroit’s planning director. “By simplifying the downtown grid and consolidating traffic flow, we are creating a more inviting street and safer pedestrian crossings.”

The plaza was funded via non-profit and corporate partnerships, and is the latest project of an investment series that also includes the QLine, MoGo bike share system, and Downtown Detroit Partnership’s Esplanade Project that runs through the central median of Woodward, south of Campus Martius Park.