Southfield Mayor Donald Fracassi says the city will issue a request for proposal shortly to create conceptual plans for the redevelopment of Northland Mall, which closed earlier this year due to slow sales and aging infrastructure. In recent weeks, the city acquired the 114-acre site for $2.4 million, which is scheduled to close on Nov. 19, and paid another $500,000 for noted artwork at the retail center.

“It’s a prime piece of property, it’s a very well-known site, but once Northland Mall closed, we felt it would be much worse to see it become an eyesore that we would have to protect from scavengers,” says Fracassi. “We wanted to give the development community a clean site in which to bid for, which we see as a mixed-use development.”

Fracassi says he spoken with officials at St. John Providence Hospital in Southfield about possible expansion on the Northland site, which could include added medical offices along with research and development activities. The site might also attract development from Oakland Community College, which in recent years acquired neighboring property for future expansion needs at its Southfield campus. 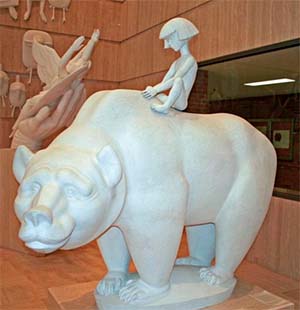 He added the former Macy’s store at Northland might be saved from demolition, given it is in relatively good condition. “We will rezone the property so it will be easier for developers to build medical uses, residential projects, service retail, and other amenities,” Fracassi says. “We believe it will be $8 million to $10 million to tear everything down and prepare the site for development.”

The mayor says he recently spoke with Carl Fredericks, son of Marshall Fredericks, who created the Boy and the Bear  that was a favorite of Northland shoppers. “We will find new uses for all of the artwork, some of which will be incorporated into the new project as well as other parts of the city,” he says. “There’s a large mural of Motown artists that we saved, and in speaking with the artist, Clifton Perry, it may be something that can be installed at Detroit Metropolitan Airport (in Romulus), because it is such an iconic work that would help tell the story of Detroit to the thousands of travelers that pass through the airport every day.”

In other news, Fracassi, who plans to run for City Council next month, says the city is in the process of creating a tech corridor along Telegraph Rd., between 8 Mile Rd. and I-696, in a bid to better brand what is a concentration of skilled manufacturing businesses, including Lear Corp., Denso Corp., and Comau, a manufacturer of industrial robots.

Fracassi says more artwork will be added in the median of Telegraph to help brand the corridor as a tech center. Comau recently installed an industrial robot in the median, near the entrance to its manufacturing and administrative campus.

In addition, Fracassi says he wants to encourage more residential development near the Southfield City Center, near Evergreen and Civic Center Drive. Last week, the city completed a $12.5 million reconstruction of Evergreen between the Lodge Freeway and I-696, which included a landscaped median, sidewalks, and two roundabouts.