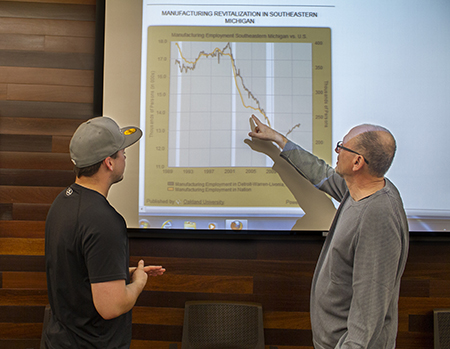 Southeastern Michigan manufacturing jobs are recovering more quickly than the national average, based on an analysis by Oakland University’s Jonathan Silberman, a professor of economics. Silberman credits the Big Three automakers with fueling the recovery.

“Two factors behind the renaissance are the desire by General Motors, Ford, and Chrysler to move suppliers and production closer to (their respective) corporate headquarters and the growing importance of research and development to the automotive industry,” says Silberman. “Southeastern Michigan is the epicenter of automotive R&D in the U.S. that spans advanced electronic and IT components, electric and hybrid car technologies, and automatic guidance systems. Innovation in these realms has the possibility to crossover into other industries generating more economic growth.”

The analysis compared manufacturing employment data for southeastern Michigan and the nation from 1990 to present. With the exception of a few years in the late 1990s, Silberman says in his report, local manufacturing employment and national trends followed nearly the same trend. “It tracks almost perfectly,” he says. “Particularly the big downfall,” which he attributes to productivity increases and outsourcing. However, since the end of the latest recession in June of 2009, manufacturing jobs in the Detroit metro region have outpaced the national average.

“I think that’s a real positive sign for the region,” he says, noting that in order to sustain growth Michigan must continue to diversify its economy.

Silberman points to Sakti3, an Ann Arbor start up in battery technology, as an example of a company that is crossing over from technology for vehicles to wearable electronics. “The real key is to spill over that innovation into other industries and entirely new companies that can really propel the region forward and generate a lot of economic growth,” he says.

To take a look at Silberman’s report click here.