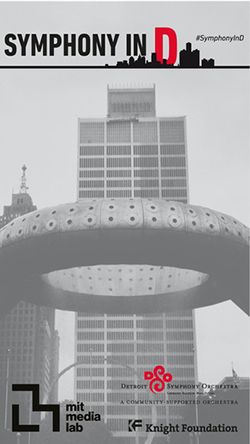 The Detroit Symphony Orchestra has created two mobile apps that allow users to submit sounds and mixes for the Symphony in D project, a collaborative effort that asks the public to supply sound suggestions for inclusion in a final musical work about the city of Detroit.

Symphony in D, a mobile app, is available to download for free in the Apple App Store and on Google Play. After users create an account, they can upload sounds through the app or via an existing file. They will also have the opportunity to add comments about what the sound means and why it’s important to the city of Detroit’s story.

Meanwhile, the Constellation app, designed by a Massachusetts Institute of Technology student, allows users to hear the collected sounds and combine them into personalized mixes. The app’s interface allows users to drag their mouse over groups of sounds and hone in on individual sounds.

Another computer software program, Hyperscore, will allow users to draw lines and colors and have them translated into musical impressions.

Symphony in D is set to premiere at Orchestra Hall at the Max M. Fisher Music Center in Detroit’s Midtown district on Nov. 16.

The project is a collaboration of the Massachusetts Institute of Technology Media Lab and the John S. and James L. Knight Foundation. The Knight Foundation donated $315,000 to the symphony last year.