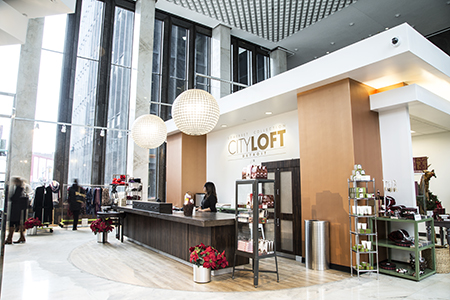 Somerset Collection’s CityLoft, a holiday popup shop with more than 30 retailers, will open next week in downtown Detroit for its ninth season. CityLoft, located along Woodward Avenue, will feature a wine and beer bar operated by Townhouse Restaurant along with an outdoor seating area with fire pits.

“Every year, Somerset Collection pushes the envelope for retail in downtown Detroit to further realize the mission of CityLoft — to be a model home for retail in the center of the city,” says Nate Forbes, managing partner for The Forbes Co., which is based in Southfield and owns the Somerset Collection in Troy. “The demand for CityLoft is driving our need to expand every season. We are thrilled to play a role in the continued growth and revitalization in the city.”

CityLoft will be open Tuesday through Dec. 19.

Additionally, The Somerset Collection also announced today that The Detroit Shoppe, a downtown Detroit popup that features iconic local brands such as products from Better Made Snack Foods, Carhartt, Faygo, and Pewabic Pottery, will also reopen in a new location on Tuesday. All proceeds from the Detroit Shoppe will benefit Detroit charities.

The 3,000-square-foot store will be located at 1520 Woodward Ave., next to the John Varvatos store. CityLoft and the Detroit Shoppe will be open from 11 a.m. to 7 p.m. Tuesday through Saturday.