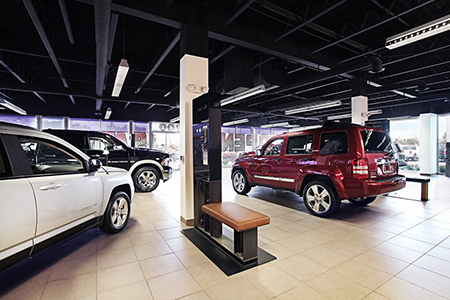 In turn, the company that got its start when Ed Snethkamp opened his first dealership in northeast Detroit in 1926 (Chrysler was formed in 1925 from the remnants of Maxwell Motor Co.), is renovating Bill Snethkamp Chrysler Dodge Jeep Ram in Lansing, where it recently added Chrysler and Jeep. And in Highland Park, the company completed an exterior renovation last year to its dealership on Woodward Avenue, near Six Mile.

“It’s been an exciting time to watch our business grow and see our operations contribute to Michigan’s economy,” says Mark Snethkamp Sr., president of Snethkamp Automotive Family in Highland Park. “We’ve been open during the renovations, and it’s nice to see our sales increase even during the construction.”

The renovation of the Redford dealership included a new façade, a new showroom for Jeep and Ram and an expanded showroom for Chrysler and Dodge, as well as updated space for the service area, write up area, a customer lounge with a coffee bar, a new children’s play area, and new LED lighting.

This summer, the company, which has nearly 300 employees, will complete similar improvements at its Lansing dealership. In Clarkston, which also saw the addition of Chrysler and Jeep, Snethkamp says the company, along with its partners, will look to expand the dealership in the coming months.

“We have a come a long way, and while we have more work to do with the renovations, it’s gratifying to see our customers using the new spaces,” Snethkamp says. “In Redford, we have a quiet lounge loaded with plugs so people can use their phones, tablets, and computers. It gets a lot of use.”