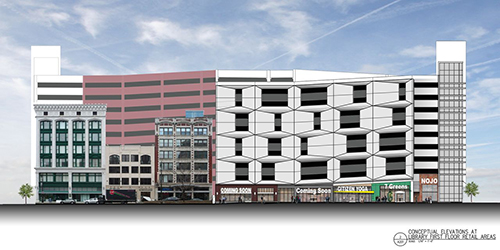 Bedrock Real Estate Services announced today three new tenants are ready to move into The Z — a combo parking garage/retail space that zigzags from the corner of Broadway and East Grand River to the corner of Library and Gratiot.

The lineup includes, NoJo Kicks, which sells luxury and rare collectible sneakers, tailored jeans, and custom hats. The store will be located along Library Street starting June 23. It will be joined by 7 Greens, a farm-to-table restaurant owned by long-time Detroit chef and caterer Kelly Schaefer. The eatery, expected to open over the summer, will offer make-your-own-salads along with homemade sauces, soups, granola, and sweets.

Additionally, Citizen Yoga, which opened its first studio in Royal Oak in August 2013, will launch its Detroit location in the fall, offering classes seven days a week and featuring a “Citizen of Detroit” clothing line.

“A distinct retail mix is helping put downtown Detroit back on the map and we’re proud to fill The Z with great experiences that Detroiters will enjoy for years to come,” says Dan Mullen, vice president of leasing and development for Bedrock Real Estate Services.

The parking garage component of The Z first opened in January. In April, the company announced Punch Bowl Social would serve as the development’s anchor tenant along Broadway Street. The sports activities and restaurant venture is expected to open in November.