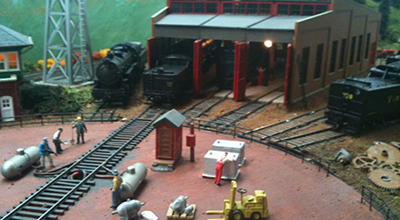 While Rainy Day Hobbies in Ferndale — a one-stop shop for hobbyists — sees an uptick in the sale of radio-controlled boats during the summer months, model railroading still draws the most business, says Rainy Hamilton Jr., who opened the store nearly five years ago.

“The train controls have improved so much (over the years),” says Hamilton, founding principal architect at Detroit-based Hamilton Anderson Associates. “They’re digital and wireless now, and you can have more than one train on the track with independent controls. You can actually walk with your train around the layout, while another engineer does the same.”

The 2,000-square-foot store, which carries products for model trains, planes, boats, submarines, and cars, has a wide customer base, ranging from youth to senior citizens. “We often have parents that bring in their children because their goal is to get their child (out) from behind the computer screen to doing something that’s three-dimensional with their hands. They go from building it to flying or driving it,” Hamilton says.

And Hamilton knows his customers. After all, he’s a hobbyist himself. For the past 13 years, he’s been designing and adding on to an elaborate, HO scale (1:87) model railroad that takes up his entire basement, occupying what was once a family room, laundry room, and pantry area.

“I think that notion of building models at a young age led me to being an architect,” says Hamilton, who was first introduced to model railroading as a child when his father bought him a set for Christmas. “It’s all kind of related — the model building, creating environments and themes. It all ties together. Those childhood hobbies can have a lasting impact on who (they) may be when they grow up.”

He adds that the experience goes beyond just building and design. “You might have an hour represent an entire day, and you have to take your train from point A to point B within a certain time frame, drop off some cars, and deliver some people to the next town. So you can actually operate the railroad as it would in the real world. It’s really a great teaching tool that teaches children and adults about logistics and how to move product from one location to another,” Hamilton says.

Hamilton says he hopes to expand the showroom floor to display more inventory as well as add a model race-car setup.