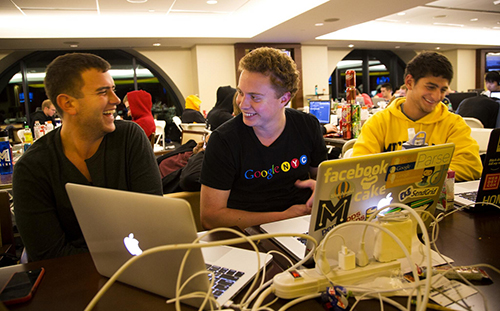 The team behind the third semiannual MHacks Hackathon — a 36-hour event where high school and college students create apps and products using computer programming and interface design skills — expects to bring 1,200 students to Detroit from Jan. 17-19. The event, held over Martin Luther King Jr. holiday weekend, will be moved for the first time off the University of Michigan campus in Ann Arbor to the Qube at 611 Woodward Ave.

“When we first announced we were hosting MHacks in Detroit, a lot of people asked us if it was safe — they’ve heard a lot of scary things about the city,” says Lucy Zhao, chief development officer of MPowered Entrepreneurship, a student organization at the University of Michigan. “We’re all about changing that perception and want to show that Detroit is a place for opportunity. And, hopefully, these really talented engineering and tech students will see that and will want to stay and eventually bring their skills to Detroit.”

While the number of participating students will be comparable to the past event held in September, Zhao says MPowered and Michigan Hackers hope to increase the percentage of female representation, which is around 12 percent.

“We’re trying to change the landscape a little bit by making a push to get more females involved in the hacker community,” says Zhao, noting that sponsors have helped arrange for buses to transport female students on the East Coast to the event. “There are a ton of talented female (engineering and tech) students out there, but I think they’re still heavily outnumbered by males at these events.”

The event is also hoping to draw more high school students and may provide travel reimbursement for up to $200, says Zhao, noting that attendance to the event is free. About 2 percent of the students who participated at the last event were still in high school. At this event, organizers hope to increase that number to 5 to 10 percent.

“A huge part of this event is the community,” Zhao says. “It’s high energy and provides a fun place to code and learn with friends. We want high school students to get that experience early on.”

While teams are ultimately competing for prizes, instructional workshops, company demos, and speakers will be presented throughout the weekend. Before winners are announced, an expo is held where every team that submitted a project has the opportunity to showcase their hack.

Zhao says entries that have a social impact or are “people pleasers” have done well in the past. At the last event, for instance, the top prize went to a team from the University of Maryland. Their submission, GreenCan, involved a garbage can that sorts items into recyclables and non-recyclables based on the sound that the item makes as it enters the container.